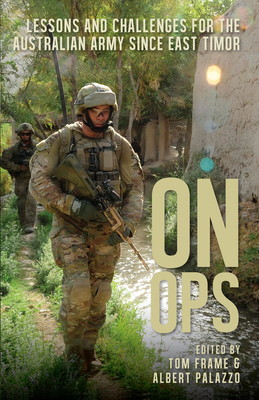 No one in the Australian government or Army could have predicted that in the 25 years following the end of the Cold War Army personnel would be deployed to Rwanda, Cambodia, Somalia, Bougainville, East Timor, Afghanistan, Iraq and the Solomon Islands. In a constructive critique of the modern Australian Army, On Ops examines the massive transformation that has taken place since troops were deployed to East Timor 1999. After decades of inactivity and the ‘long peace’ of the 1970s and 1980s the Army was stretched to the limit. Contributors include John Howard and Peter Leahy as well as Craig Stockings, David Horner and an impressive array of military historians, academics, intelligence experts and ex and current Army.

Tom Frame was a naval officer for 15 years before being ordained to the Anglican ministry. He served as Bishop to the Australian Defence Force from 2001–2007 and is the author/editor of 28 books on a range of topics including the ethics of armed conflict. He is a regular media commentator on naval, religious and ethical affairs. Albert Palazzo is the Director of Research for the Australian Army. He has published widely on the history of the Australian Army. His recent research has focussed on the effects of resource limits and climate change on the future character of war.
My Account • Sign In • Sign Out • Register
NEW & USED BOOKS
AUTHOR EVENTS • GIFTS
Tempe
6428 South McClintock Drive
480.730.0205
[Google Map]
Sunday-Friday 10am-8pm
Saturday 9am-8pm
Trade Counter 11am-6pm daily