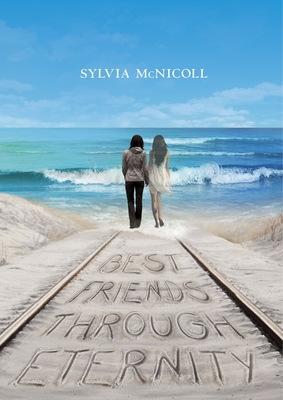 Inspired by the true story of a teen who was killed at a railway crossing, the author weaves the tale of fourteen-year-old Paige, who, taking a shortcut alongside the tracks to avoid the school bullies, is tragically hit by a train and transported to a surreal world where she encounters Kim, who died seven years before. Convinced she is only dreaming, Paige must discover a way to return to her former life. Poignant, gripping, and full of unexpected twists and turns, Best Friends through Eternity will resonate with readers who have struggled with cultural identity, a sense of belonging, and the real meaning of home.

Sylvia McNicoll is the author of over thirty books, many of which have garnered awards and honors. Her novel Bringing Up Beauty won the Ontario Library Association's Silver Birch Award, while crush.candy.corpse was shortlisted for the Arthur Ellis YA Crime Novel of the Year Award, the Red Maple Award, the Manitoba Young Readers' Choice Award, and the Snow Willow Award, as well as being selected as one of OLA's Best Bets and Resource Links' Year's Best for 2012. Former editor of Today's Parent, Sylvia McNicoll travels extensively to teach and talk about writing. Follow her blog at sylviamcnicoll.com.

Selected, CBC's Next Chapter with Shelagh Rogers's list of Best Summer Reads for Children and Teens, 2015


"This is a nicely paced story with solid characters .... The narrative remains compelling .... [and] will be a solidly satisfying read for many middle school girls." - School Library Journal


"McNicoll's story addresses a slew of important issues - including racism, self-perception, intergenerational culture clashes, bullying, and selflessness - via an engaging, multilayered plot that will give readers much to ponder. It is also refreshing to see characters from diverse cultures presented realistically, something that is still sorely lacking from most children's fiction." - Quill & Quire


"Influenced by the true story of a teenager who died at a railway crossing, Sylvia McNicoll has written a supernatural fiction that aims to fill in the blanks of a tragic death .... The tone is fresh and feels present-day appropriate, challenging stereotypes, racism and how families integrate into Canadian culture. Don't be fooled by the cover; this novel takes place largely after death has occurred, though it remains lively throughout." - The Globe and Mail

“Celebrated writer Sylvia McNicoll's latest book is Best Friends Through Eternity (February), about a teen who is hit by a train and transported to a surreal world where she meets another girl who'd been killed years before.”
—    “Most Anticipated: 2015 Kids’ Books Spring Preview”, 49th Shelf