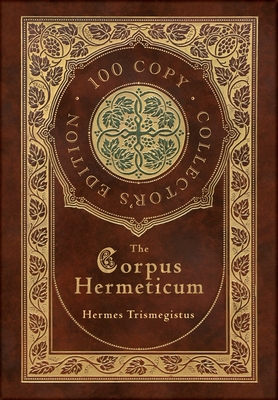 The Corpus Hermeticum is a collection of Egyptian-Greek wisdom texts from the 2nd century or earlier. The texts form the basis of Hermeticism, which is a religious, philosophical, and esoteric tradition that held great importance during both the Renaissance and the Reformation periods. The work discusses the divine, the cosmos, the mind, alchemy, astrology, and nature.

The Corpus Hermeticum dwells upon the oneness and goodness of God, urges purification of the soul, and discusses a spiritual rebirth through the enlightenment of the mind. Much of the importance of Hermeticism arises from its connection with the development of science between 1300 to 1600 AD. The prominence that it gave to the idea of influencing or controlling nature led many scientists to look to magic and its allied arts. Sir Isaac Newton placed great faith in the concept of an unadulterated, pure, ancient doctrine, which he studied vigorously to aid his understanding of the physical world.

This cloth-bound book includes a Victorian inspired dust-jacket, and is limited to 100 copies.