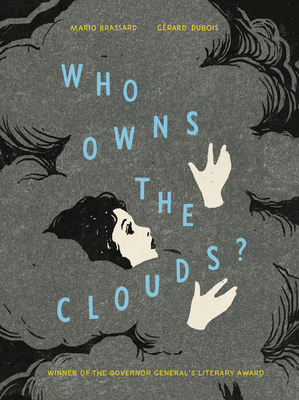 A powerful and visually arresting fictional memoir of trauma, memory and hope in the aftermath of war, for readers 12 and up. For fans of Maus.

Even though Mila is no longer a child, she is overcome by memories — memories of a childhood halfway between reality and dreaming, and not knowing which is which.

In her dreams, Mila and her family leave their bombed village to stand in line for weeks on end, suitcases in hand, hoping to move on to better lives. But the memories of her uncle’s disappearance, and the approach of looming clouds, keep blurring the lines between past and present, real and unreal. How can Mila move forward? Perhaps if the clouds can remind her of where she’s from, they can also show her where to go . . .

Winner of a Governor General’s Award, Canada’s most prestigious literary prize, and the Bologna Ragazzi Award, this stunningly evocative book about experience, trauma and healing will stay with readers from beginning to end.

GÉRARD DUBOIS studied graphic design at the École Supérieure des Arts Estienne in Paris before moving to Montreal in 1991. His 2015 children’s book Enfantillages received a Special Mention from the BolognaRagazzi. His illustration work has appeared in the New York Times (in weekly column “Gray Matter”), the Wall Street Journal, Time (in Nancy Gibbs' ongoing column), GQ, Rolling Stone, The New Yorker, the Washington Post, Le Monde, The Guardian, Entertainment Weekly, Harper’s, The Atlantic and others, as well multiple Folio Society editions, and he has received multiple awards from the Society of Illustrators. His art has been exhibited in galleries around the world. In 2018, Canada Post released a stamp with his art as part of the Great Canadian Illustrators series. He currently teaches at the Université du Quèbec.

"A fictional adult protagonist looks back on a period in her childhood spent fleeing a war-torn country in this speculative, ambient graphic novel, which thoughtfully unravels themes of grief, healing, and memory." —Publishers Weekly

"Those who survive relocation from war-torn regions are, as the narrator of Who Owns the Clouds? puts it, 'different from other people.' . . . [T]he degree of that difference is etched with matchless precision and grace." —Shelf Awareness