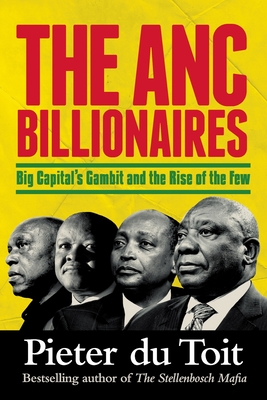 'We were talking about the rise of Japan, about Ronald Reagan's Star Wars ... globalisation, technology. And they were still banging on about the Freedom Charter.' - Anglo American's Michael Spicer on the ANC in the mid-1980s

In 1985, a group of white South African business leaders, led by Gavin Relly, the executive chairperson of Anglo American, travelled to a game lodge in Zambia to meet with the exiled ANC leadership under Oliver Tambo and Thabo Mbeki. This visit set in motion a coordinated and well-resourced plan by big business to influence and direct political change in South Africa.

In The ANC Billionaires, top-selling author Pieter du Toit draws on first-hand accounts by major roleplayers about the contentious relationship between capital and the ANC before, during and after the country's transition to democracy, and shows how the liberation organisation was completely unprepared to navigate the intersection between business and politics.

He also ties the rise of the new elite - including Cyril Ramaphosa, Patrice Motsepe and Saki Macozoma - to the ANC, a party of government and patronage.