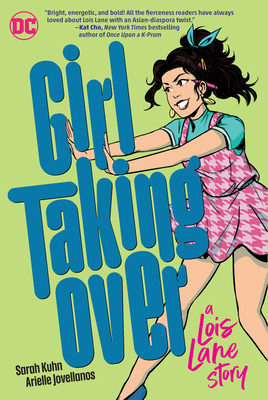 Can Lois Lane open herself up to friendship, romance, and being vulnerable in order to get the future that's right for her?  She might have to change her entire life plan to find out.

Ambitious small town girl Lois Lane tackles a summer in the big city with gusto, but a cavalcade of setbacks—including an annoying frenemy roommate, a beyond tedious internship at a suddenly corporatized website, and a boss who demotes her to coffee-fetching minion—threatens to derail her extremely detailed life plan. And, you know, her entire future.

When Lois uncovers a potentially explosive scandal, she must team up with the last person she’d expect to publish her own website for young women. And as Lois discovers who she really is and what she actually wants, she becomes embroiled in her own scandal that could destroy everything she's worked so hard to create.

From beloved author, Sarah Kuhn (Shadow of the Batgirl, Heroine Complex), and with expressive and lively art by Arielle Jovellanos, comes a charming YA story about the strength it takes to embrace the messiness of life.

Sarah Kuhn is the author of the popular Heroine Complex novels—a series starring Asian American superheroines. The first book is a Locus bestseller, an RT Reviewers’ Choice Award nominee, and one of the Barnes & Noble Sci-Fi & Fantasy Blog’s Best Books of 2016. Her YA debut, the beloved Japan-set romantic comedy I Love You So Mochi, is a Junior Library Guild selection and a nominee for YALSA’s Best Fiction for Young Adults. Her latest novel for young adults, From Little Tokyo, With Love—a modern fairy tale featuring a half-Japanese heroine—is a Junior Library Guild Selection, a nominee for the Golden Poppy Award, and Penguin Random House’s One World, One Book title of the year. She has also penned a variety of short fiction and comics, including the graphic novel Shadow of the Batgirl for DC Comics and the Star Wars audiobook original Doctor Aphra. Additionally, Sarah was a finalist for the CAPE (Coalition of Asian Pacifics in Entertainment) New Writers Award and the Astounding Award for Best New Writer.

A third generation Japanese American, she lives in Los Angeles with her husband and an overflowing closet of vintage treasures.


Arielle Jovellanos is a Filipina-American illustrator, writer & comic artist who specializes in narrative illustrations with an eye for character interaction and cute clothing. Her most recent projects include Black Star, an original sci-fi graphic novel written by Eric Anthony Glover for Abrams Megascope, and Evil Thing: A Villains Graphic Novel (Disney-Hyperion) adapted from Serena Valentino’s bestselling Cruella De Vil novel. Her work has also been featured in the Eisner & Harvey nominated anthology Fresh Romance and in magazines, comics, books, and branded social media campaigns. She is currently adjunct faculty in the illustration department at the Fashion Institute of Technology.