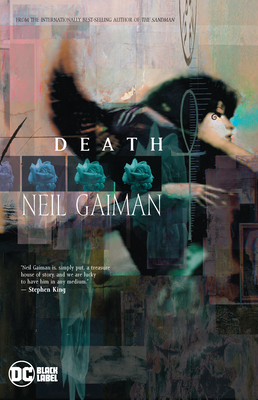 With The Sandman heading to Netflix, this deluxe edition hardcover collects Neil Gaiman’s solo stories of the series’ most beloved character, Death!

From the pages of Newbery Medal-winner Neil Gaiman's The Sandman comes fan-favorite character Death in a collection of her solo adventures!

The first story introduces the young, pale, perky, and genuinely likable Death. One day in every century, Death walks the earth to better understand those to whom she will be the final visitor. Today is that day. As a young mortal girl named Didi, Death befriends a teenager and helps a 250-year-old homeless woman find her missing heart. What follows is a sincere musing on love, life, and (of course) death.

In the second story, a rising star in the music world wrestles with revealing her true sexual orientation, just as her lover is lured into the realm of Death, where Death herself should make an appearance. A practical, honest, and intelligent story that illuminates "the miracle of death."

With The Sandman television adaptation debuting on Netflix, and the audio drama unfolding on Audible, explore the comic book classics that started it all! Collects Death: The High Cost of Living #1-3, Death: The Time of Your Life #1-3, the “Death Talks about Life” AIDS pamphlet, stories from Vertigo: Winter’s Edge #2 and The Sandman: Endless Nights, the short story “The Wheel” from the 9-11 tribute book, and The Sandman #8 and #20.

Creator of The Sandman and one of comics' most accomplished writers, Neil Gaiman is also the New York Times bestselling author of the novels Anansi Boys, American Gods, Stardust, and Coraline, as well as the short story collections M Is for Magic and Smoke and Mirrors and the multimedia creation Neverwhere. He also co-wrote the Jim Henson Productions film MirrorMask with longtime collaborator Dave McKean, illustrator of the Gaiman-written graphic novels Mr. Punch, Violent Cases, and Black Orchid. Among his many awards are the Hugo, the Nebula, the Eisner, the Harvey, the Bram Stoker, and the World Fantasy Award. Originally from England, Gaiman now lives in the United States.