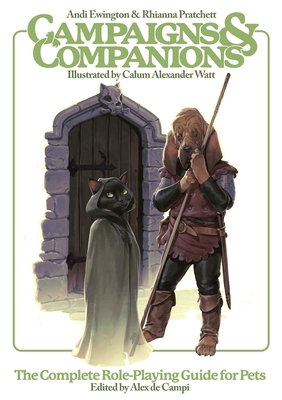 What if your pets could play D&D? And what if they were… kind of jerks about it?

If there are two things all geeks love, it’s roleplaying games, and their pets. So why not fuse the two? It’s time to grab your dice, dust off that character sheet, and let your cat or dog (or guinea pig, or iguana, or budgie) accompany you on an epic adventure! It’ll be great!

Andi Ewington is a writer who has written numerous comic titles including Forty-Five45, S6X, Sunflower, Red Dog, Dark Souls II, Just Cause 3, Freeway Fighter, and Vikings. Andi lives in Surrey, England with his wife, two children and a plethora of childhood RPGs and ‘Choose Your Own Adventure’ gamebooks he refuses to part with. He’s usually found on Twitter as @AndiEwington.

Rhianna Pratchett has been a professional writer for 18 years. In 2007 her work on Heavenly Sword was nominated for a BAFTA and a year later she won a Writers’ Guild of Great Britain ’Best Videogame Script’ award for Overlord. She also wrote the Tomb Raider: The Beginning comics with Dark Horse and the 6-part Mirror’s Edge miniseries with DC Comics and works with the IGDA Writers’ Special Interest Group, the Writers’ Guild of Great Britain and BAFTA Games to help improve games narrative and the lot of games writers everywhere. Rhianna currently lives in London, with a couple of neurotic tabbies. True to British form, she drinks a lot of tea.

Calum Alexander Watt is a freelance concept artist and illustrator working in the entertainment industry. He has created costume concepts for Neill Blomkamp (Alien and Zygote), Lucasfilm (Star Wars The Rise of Skywalker, Solo A Star Wars Story), character designs for Pixar (Lightyear) and storyboarded for Blur Studios and Tim Miller (Terminator and Love, Death and Robots). He lives and works in the UK, somewhere near the sea with his wife, twin daughters and 2.9 cats.

Alex de Campi's mostly-indie career stretches from her Eisner-nominated debut Smoke (Dark Horse) through recent Eisner nominees Bad Girls (Gallery 13) and Twisted Romance (Image). Plus company work: she's killed off most of Riverdale, twice, in Archie vs Predator I & II. Her next projects are YA adventure The Backups (Imprint / MacMillan, 2020) and a thriller with director Duncan Jones. Catch her YA adventure Reversal on her Patreon, and action-thriller Bad Karma on Panel Syndicate. She also writes for TV and film (the Blade Runner anime & more). She is on social media as @alexdecampi and lives in Manhattan.

"Dangerously funny -- I had to make a saving throw vs side-splitting. Pet adventurers -- you have been warned!" -- Ian Livingstone

"Will make you chuckle away to yourself until those around you move away rapidly as they start questioning your sanity."
— Devolution Magazine

"Filled to the brim with the funniest situations related to D&D."
— FanFiAddict

“A beautiful book that will have you in stitches by the first page. Make space for Campaigns & Companions next to your Players Handbook.”
— Beneath A Thousand Skies

"Geeky, glorious and guaranteed to delight Dungeons & Dragons aficionados, this utterly hilarious role-playing guide for pets will have its readers in stiches from the very first page."
— Waterstones - Best Humour Books of 2021