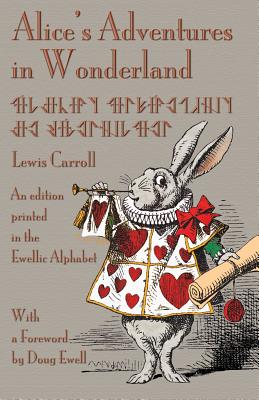 Doug Ewell devised the Ewellic alphabet in 1980, as a form of secret writing. A decade later, after Ewell had become a supporter of the Unicode Standard, he worked to improve his alphabet's character repertoire and encoding. Ewellic is a phonemic alphabet, like Shavian, Unifon, and shorthands such as Pitman and Gregg. With fonts specially designed by Michael Everson, this edition of "Alice's Adventures in Wonderland" is written entirely in this unique featural alphabet.

Lewis Carroll, born Charles Lutwidge Dodgson (1832-1898) is best known for Alice's Adventures in Wonderland, in addition to its sequel Through the Looking-Glass. He was a mathematician, deacon, and photographer in addition to being a writer.
My Account • Sign In • Sign Out • Register
NEW & USED BOOKS
AUTHOR EVENTS • GIFTS
Tempe
6428 South McClintock Drive
480.730.0205
[Google Map]
Sunday-Friday 10am-8pm
Saturday 9am-8pm
Trade Counter 11am-6pm daily