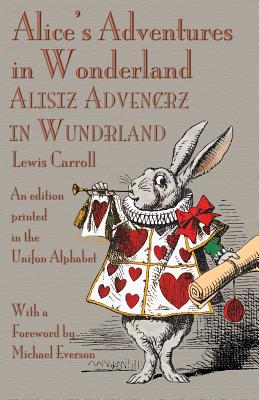 Lewis Carroll is a pen-name: Charles Lutwidge Dodgson was the author's real name and he was lecturer in Mathematics in Christ Church, Oxford. Dodgson began the story on 4 July 1862, when he took a journey in a rowing boat on the river Thames in Oxford together with the Reverend Robinson Duckworth, with Alice Liddell (ten years of age) the daughter of the Dean of Christ Church, and with her two sisters, Lorina (thirteen years of age), and Edith (eight years of age). As is clear from the poem at the beginning of the book, the three girls asked Dodgson for a story and reluctantly at first he began to tell the first version of the story to them. There are many half-hidden references are made to the five of them throughout the text of the book itself, which was published finally in 1865. This edition of Alice's Adventures in Wonderland presents the text transcribed into the Unifon alphabet. Unifon was developed as an auxiliary phonetic alphabet designed to facilitate access to literacy to English-speaking children, by presenting to them a writing system that worked by sound. Tests showed that children were able to learn to read rather quickly using this system, and, having made that breakthrough, were able to transition to tradi-tional English orthography relatively easily. Unifon was developed in the 1950s by Dr John R. Malone, an economist and newspaper equipment consultant who became interested in phonetic writing while consulting with the Bendix Corporation, which was interested in questions of aviation com-munication. That work was abandoned when the International Air Transport Association selected English as the language of inter-national airline communications in 1957. But Malone's interest in phonetic writing resurfaced when his young son com-plained about difficulties learning to read. From about 1960 to the 1980s, Margaret S. Ratz used Unifon to teach first-graders at Principia College in Elsah, Illinois. A variety of teaching materials exist using Unifon. From the 1974 to his death in 1993 John M. Culkin, a specialist in media studies, also promoted Unifon. The transcription used here is based on the Carnegie Mellon University Pronouncing Dictionary, and accordingly reflects American pronunciation-naturally enough, since Unifon was devised by an American.
My Account • Sign In • Sign Out • Register
NEW & USED BOOKS
AUTHOR EVENTS • GIFTS
Changing Hands Tempe
6428 S McClintock Dr, Tempe, AZ 85283
480.730.0205
[Google Map]
Sun-Sat: 10am-7pm