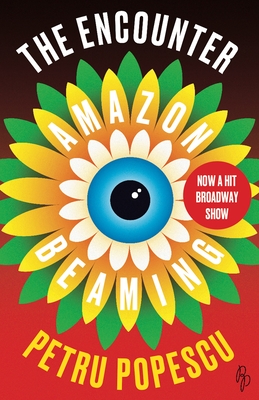 Here’s a weird little tale: A photojournalist gets lost in the Amazon with a reclusive tribe of cat-whiskered people, gets embroiled in tribal politics, takes a heroic amount of strange forest drugs, discovers the telepathic “beaming” language of the ancients, and goes on a ceremonial hallucinatory exodus to the beginning of time. Yeah, it sounds like a total crock, but Loren McIntyre is not your garden-variety crackpot: in the process he found the source of the Amazon River, a laguna which now bears his name. The story is told from Loren’s own journal, and the gaps in the narrative are filled in by an obscure Romanian scribe: Petru Popescu. With sensitivity and survivalist grit, they philosophize about man’s relationship with nature, the metaphysics of time, and the fragility of tribal cultures standing between civilization and its thirst for resources; all this wrapped up in rainforest wisdom, spoken from the minds of shamans who still remember.

THE ENCOUNTER tells the true story of National Geographic photographer Loren McIntyre who became lost in a remote area of Brazil in 1969, leading to a startling encounter that changed his life.

The Broadway stage adaptation of THE ENCOUNTER will run from September 20, 2016 through January 8, 2017 at The Golden Theatre: http://theencounterbroadway.com/

1969: Loren McIntyre makes contact with the elusive Mayoruna 'cat people' of the Amazon's Javari Valley. He follows them - into the wild depths of the rainforest. When he realizes he is lost, it is already too late.

Stranded and helpless, McIntyre must adjust to an alien way of life. Gradually, he finds his perception of the world beginning to change, and a strange relationship starts to develop with the Mayoruna chief - is McIntyre really able to communicate with the headman in a way that goes beyond words, beyond language? Petru Popescu's gripping account of McIntyre's adventures with the Mayoruna tribe, and his quest to find the source of the Amazon, is reissued here to coincide with Complicite's acclaimed new stage production inspired by McIntyre's incredible story.

Born in Bucharest in 1944, Petru Popescu was Communist Romania's most provocative young novelist, before he was forced to defect and start writing in English. His Romanian novels Captured and Burial of the Vine are classics of the resistance against totalitarian art. Moving to the United States, he wrote movies including The Last Wave and Death of an Angel, before returning full time to authoring books. The Encounter: Amazon Beaming, Almost Adam, The Return, and The Oasis made him known worldwide. In The Encounter, he renders the discoverer of the Amazon's source, Loren McIntyre, as an unforgettable protagonist for his unique experiences in the rain forest among indigenous people, and for his inward explorations, pursuing the potential to win one's spiritual freedom. Freedom is clearly Popescu's signature motif. He is married to screenplay writer Iris Friedman, and they live in Los Angeles.

Born in London in 1957, Simon McBurney is an actor, director and writer, as well as the founder and artistic director of the acclaimed UK theatre company Complicite, whose productions include The Master and Margarita and A Disappearing Number.

• "A blazing tale of mysticism and acculturation." — Financial Times

• "[Petru Popescu] gives McIntyre's story the narrative drive of a thriller... a book that suggests new ways of looking at the world and our place within it." - Sunday Telegraph

• "As powerful and mystical as any ancient epic... Travel writing in a class of its own: Heart of Darkness meets Walden." - The Lady

• "A fascinating tale of ethical and spiritual dilemmas." - Wanderlust