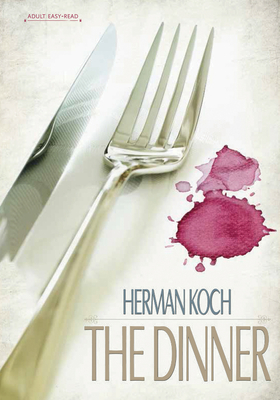 By Herman Koch
Email or call for price
Hard to Find

An easy-to-read version of the New York Times and USA Today bestseller, ideal for readers 18 and up who struggle with ordinary fiction

One evening in Amsterdam, two couples meet for dinner. They need to discuss their teenage sons. The boys have committed a horrifying act that was caught on TV. They remain unidentified—except by their parents. How far will each couple go to protect their child? This is a gripping psychological tale of grief, shame, blame, doubt, and pride passed on from one generation to the next, in an easy-to-read format.

Herman Koch is a Dutch writer. He was a renowned television actor on the series Jiskefet and a former columnist for the newspaper Volkskrant. The Dinner has already won the prestigious Publieksprijs Prize, in 2009.
My Account • Sign In • Sign Out • Register
NEW & USED BOOKS
AUTHOR EVENTS • GIFTS
Changing Hands Tempe
6428 S McClintock Dr, Tempe, AZ 85283
480.730.0205
[Google Map]
Sun-Sat: 10am-7pm