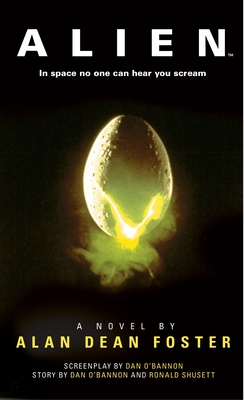 The official novelization of the famous Alien movie with Sigourney Weaver as Ellen Ripley!

A crew of spaceship Nostromo is suddenly woken up from a cryogenic sleep because of mysterious signals coming from an unknown planet and received by a ship computer. The astronauts land on the planet surface and go to investigate an alien spaceship where one of them is attacked by an alien which fasten itself on his face. When the crew returns to their ship and abandon the planet, nobody forefeels that the real horror will begin very soon ...

Alan Dean Foster is the acclaimed author of movie tie-ins for Star Wars, Alien, Transformers. He was awarded the IAMTW Grand Master Scribe Award in 2008. A best-selling science-fiction and fantasy author in his own right; the popular Pip and Flinx novels and the Founding of the Commonwealth series.

"Foster’s treatment of the source material has only enhanced my appreciation for this classic story." - Blogcritics

"The book was well written, it filled in a few gaps in the film that I didn’t know needed to be filled until I read them, and it put the film in a different context, which may color my next viewing.  If you consider yourself a fan of the film, it’s worth checking out." - Top Hat Sasquatch

"A hell of a fun and terrifying read. It’s one I recommend to anyone who loves the film or a good old fashioned sci-fi romp through the hell in our stars." - Ravenous Monster

“In text form the primal dread conjured by its events and themes is as timeless as the cold and empty darkness from which it spreads. 9/10.” - Starburst

“The official novelization is a stroll-back to memory lane of sweat inducing horrors.” – Retrenders

"The official novelization is a stroll-back to memory lane of sweat inducing horrors." - Retrenders

“An open door to the ALIENS universe that offers the curious even more information about the dangerous world of the films.” – Suvudu

“Worthy to be on your shelf if you consider yourself a fan of the film.” – Retroist

"Manages to capture the emotion and terror of the film." - Geek Girl Project

"As timeless as the movie that spawned it" - Den of Geek


“a master class in technically accomplished writing, as Foster uses the tools of his trade to translate the sparse details of a script into a lush, horrifyingly detailed haunted spaceship tale, populated by characters you’ll feel for” - Barnes & Noble SFF blog