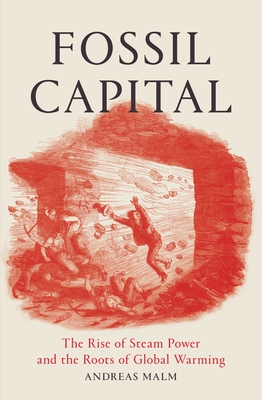 The more we know about the catastrophic implications of climate change, the more fossil fuels we burn. How did we end up in this mess? In this masterful new history, Andreas Malm claims it all began in Britain with the rise of steam power. But why did manufacturers turn from traditional sources of power, notably water mills, to an engine fired by coal? Contrary to established views, steam offered neither cheaper nor more abundant energy—but rather superior control of subordinate labor. Animated by fossil fuels, capital could concentrate production at the most profitable sites and during the most convenient hours, as it continues to do today.

Sweeping from nineteenth-century Manchester to the emissions explosion in China, from the original triumph of coal to the stalled shift to renewables, this study hones in on the burning heart of capital and demonstrates, in unprecedented depth, that turning down the heat will mean a radical overthrow of the current economic order.


“The definitive deep history on how our economic system created the climate crisis. Superb, essential reading from one of the most original thinkers on the subject.”
—Naomi Klein, author of This Changes Everything and The Shock Doctrine

Andreas Malm teaches human ecology at Lund University, Sweden. His work has appeared in journals such as Environmental History, Historical Materialism, Antipode and Organization & Environment. He is the author, with Shora Esmailian, of Iran on the Brink: Rising Workers and Threats of War, and of half a dozen books in Swedish on political economy, the Middle East and climate change.

“Malm forcefully unmasks the assumption that economic growth has inevitably brought us to the brink of a hothouse Earth. Rather, as he shows in a subtle and surprising reinterpretation of the Industrial Revolution, it has been the logic of capital (especially the need to valorize immense sunk investments in fossil fuels), not technology or even industrialism per se, that has driven global warming.”
—Mike Davis, author of Planet of Slums and Ecology of Fear

“Fossil Capital is a theoretical masterpiece and a political-economic-ecological manifesto. It looks unblinkingly at the catastrophe that could await human society if we fail to act on the words System Change or Climate Change. It is a book that I will return to again and again—and take notes.”
—John Bellamy Foster, University of Oregon, author of Marx’s Ecology

“The definitive deep history on how our economic system created the climate crisis. Superb, essential reading from one of the most original thinkers on the subject.”
—Naomi Klein, author of This Changes Everything and The Shock Doctrine

“A unique reconceptualization of the relationship between nature, capitalism, and Marxism.”
—Jacobin

“Malm builds a deep, insight-packed history of how society came to be in thrall to the twin engines of combustion and capital.”
—Barbara Kiser, Nature

“His thorough account of the switch to steam shows quite convincingly that coal did not make Britain great for everyone, and the transition was rooted not in technological superiority or environmental scarcity but in good old fashioned class conflict.”
—Dayton Martindale, In These Times

“Anyone with an interest in ecology, and anyone opposed to capitalism, must read Malm’s crucial contribution to understand how and why capitalism makes war on planet Earth.”
—Bill Crane, International Socialist Review

“A major and important revision of Marxist theory … a singularly important work, pointing the way for future work in economics, politics, theories of time, space and energy.”
—Radical Philosophy

“The best book written about the origins of global warming … Like Naomi Klein’s This Changes Everything, Fossil Capital trenchantly demonstrated that capitalism and capitalists are responsible for climate change.”
—Michael Robbins, Bookforum

“Will climate change make us evaluate differently the achievements of George Stevenson and James Watt, Industrial Age pioneers? For it was in Britain, which accounted for 80 per cent of fossil fuel combustion in 1825, that ‘the fossil economy’ began. Malm’s history is expansive and detailed, and often quite terrifying in its analysis. Essential reading.”
—Herald Scotland

“Fossil Capital presents, with impressive detail and theoretical clarity, how the fossil fuel economy has come into being. Malm does not reiterate commonplaces about climate change, but looks closely at its origins. This extremely well-written book is radical without being dogmatic. Malm does not take his audience for granted at any point; there are no short cuts.”
—Marx and Philosophy Review of Books

“Has Andreas Malm written the crime story of the year with his book Fossil Capital? Or submitted the fossil world order to psychoanalysis? Both. The depth of his inquiry into how our economic system created the climate crisis is impressive … Very concrete, very beautiful, and perfectly reasonable.”
—Aftonbladet


“If we are to rescue ourselves from the looming catastrophe that is climate change, one of our tasks must be to understand how we became enmeshed in an economy powered by fossil fuels. It would be hard to find a more illuminating book for this purpose than Fossil Capital, a history of the rise of coal-fired steam power in Britain.”
—Michael W. Howard, Socialism and Democracy