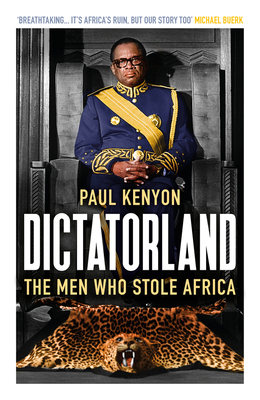 One dictator grew so rich on his country's cocoa crop that he built a 35-story-high basilica in the jungles of the Ivory Coast. One austere, incorruptible leader shut Eritrea off from the world in a permanent state of war and conscripted every adult into the armed forces. The Libyan army officer who authored a new work of political philosophy, The Green Book, and lived with a harem of female soldiers, running his country like a mafia family business. And behind these stories of fantastic violence and excess lie the dark secrets of Western greed and complicity, the insatiable taste for chocolate, oil, diamonds, and gold that have encouraged dictators to rule with an iron hand, keeping their people in dire poverty.

Paul Kenyon is a BBC correspondent and BAFTA award-winning journalist and author.

"In this colorful and brutal history, British journalist Kenyon (I Am Justice: A Journey out of Africa) explores the stubborn hold on power of seven kleptocratic postcolonial African leaders. . . . His prose is so artfully descriptive that readers will feel like they are on the ground alongside him. For readers unfamiliar with the ins and outs of African politics, this will be illuminating." —Publishers Weekly

"Well written and sensibly structured. . . . Some of the most revealing passages are based on interviews with retired expatriate executives and diplomats who were witness to the excesses of the early post-colonial years." —Sunday Times

"A humane, timely, accessible and well-researched book that shines a light on urgent African issues . . . that, when we consider the state of our own societies, can no longer be dismissed as merely somewhere else's problem." —Irish Times

"A jaw-dropping tale of greed, corruption and brutality." —Daily Express

"It is [the] minute observations that make Mr Kenyon's book so hard to put down." —Economist

"Highly readable . . . A chapter on the rise of Félix Houphouët-Boigny is especially vivid." —Times