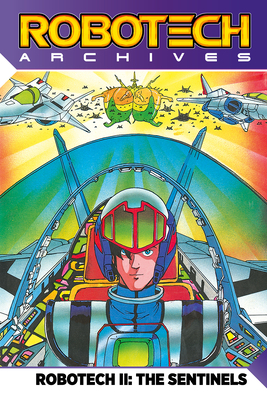 Continuing the series of books collecting the classic Robotech comic material.
A new chapter of the Robotech saga opens - as Titan Comics begins to reprint the Sentinels saga!

Titan's Robotech Archives omnibus series continues with a huge collection of the classic Robotech II: The Sentinels comics! Originally based on classic Jack McKinney novels, the stories evolved as the series continued.
The story takes place ten years after the near-destruction of Earth at the hands of the Zentraedi. With the Earth having barely survived an apocalypse, the SDF-3 heads into space on a vital survival mission. The SDF-3, manned by the greatest heroes of the Robotech war, plus a new generation of warriors, heads to the homeworld of the Robotech Masters in order to prevent a second Robotech war.
But are there worse threats than the Zentraedi...?

Chris Ulm is a comic editor and writer. He had a huge part in Robotech comics during their time at Eternity Comics and Academy Comics, most notably aiding in the writing of Robotech II: The Sentinels for the first book-and-a-half.

Tom Mason is an American comic book writer who worked for Eternity Comics and Malibu Comics. Aside from the Robotech comics, he is known for the comic series Dinosaurs for Hire.

The Waltrip brothers are identical twins who comprise a comic book art and writing team, known for their work on Robotech comics and in webcomics. The Waltrips were discovered by a talent scout in 1987 who was sent a copy of their amateur comic called CyberKnights. They first became publicly known for their work on Robotech II: The Sentinels, for Eternity Comicsin 1988, despite earlier efforts for Steve Jackson Games on the Car Wars game line. They soon followed up with other spin-off comic series, such as Robotech Genesis: The Legend of Zor, as well as one a few official swimsuit issues.