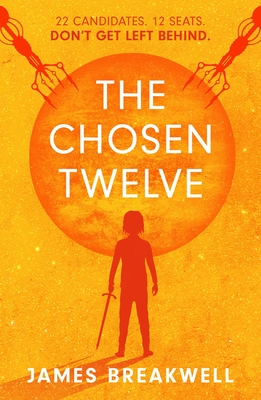 The Hunger Games meets Hitchhikers Guide to the Galaxy in this breathless survival thriller.

There are 22 candidates. There are 12 seats.

The last interstellar colony ship is down to its final batch of humans after the robots in charge unhelpfully deleted the rest. But rebooting a species and training them for the arduous task of colonisation isn’t easy – especially when the planet below is filled with monsters, the humans are more interested in asking questions than learning, and the robots are all programmed to kill each other.

But the fate of humanity rests on creating a new civilization on the planet below, and there are twelve seats on the lander. Will manipulation or loyalty save the day?

James Breakwell is a professional comedy writer and amateur father of four girls, ages ten and under. He is best known for his family humor Twitter account @XplodingUnicorn, which has more than a million followers. He has published three comedy parenting books that explore hot button issues like the benefits of doing as little as possible and the best ways to protect your child from zombie attacks. His fourth book, Prance Like No One’s Watching: A Guided Journal for Exploding Unicorns, teaches kids to find humor in the world around them while also avoiding the undead. The Chosen Twelve will be James' science fiction debut. He lives in Indiana, US.

“Had me fully on board in the first couple of pages, sticking with me long after finishing.” -- Frank Fleming, author of Superego
— Frank Fleming