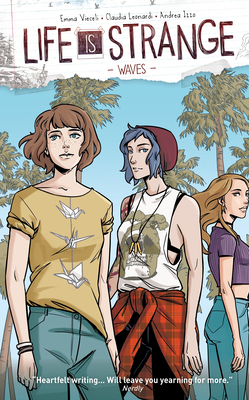 Forced to leave her original timeline and her beloved Chloe behind, Max Caulfield must come to terms with both an alternative version of Chloe, and a world where Rachel Amber is very much alive!

Based on the critically-acclaimed, BAFTA-winning video game Life is Strange, Waves continues Max's adventures in a potential new future. In an unfamiliar new timeline where Rachel is dating Chloe, Max struggles to find a place for herself - as well as uncover the truth about a mysterious boy with a strange talent of his own...

Emma Vieceli is a comics artist and writer who has worked on a variety of projects by esteemed publishers, including Doctor Who, Back to the Future, Jem and the Holograms, Manga Shakespeare, Girl Comics, and My Little Pony. She has also illustrated popular graphic novel adaptations of Vampire Academy and Alex Rider. Her creator-owned success is Breaks, written with Malín Ryden.


Claudia Leonardi is an up and coming artist based in Italy. Life is Strange is her breakthrough into the world of comic books, with many more projects to come.

"Another knockout issue for the videogame adaptation series. The dialogue, story, emotions, and art are each complex and compelling" - ComicCon.com

"One of the best comic books to be based on a video game, if not the best of this particular sub-genre" - Multiversity Comics

"The artistic choices are spot on, as they have been since the inception of the comic series, and the writing never feels out of character" - The Xbox Hub

"Not to be missed" - Culture of Gaming