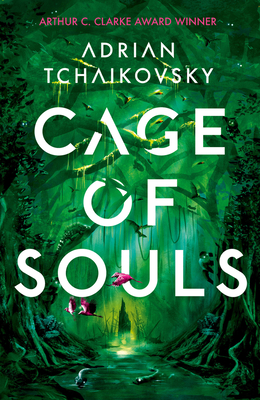 Humanity clings to life on a dying Earth in an epic, far-future science fiction novel from an award-winning author.

The sun is bloated, diseased, dying perhaps. Beneath its baneful light, Shadrapar, last of all cities, harbors fewer than 100,000 human souls. Built on the ruins of countless civilizations, Shadrapar is a museum, a midden, an asylum, a prison on a world that is ever more alien to humanity.

Bearing witness to the desperate struggle for existence between life old and new is Stefan Advani: rebel, outlaw, prisoner, survivor. This is his testament, an account of the journey that took him into the blazing desolation of the western deserts; that transported him east down the river and imprisoned him in the verdant hell of the jungle's darkest heart; that led him deep into the labyrinths and caverns of the underworld.

He will meet with monsters, madman, mutants. The question is, which one of them will inherit this Earth?

Adrian Tchaikovsky was born in Lincolnshire before heading off to Reading to study psychology and zoology. He subsequently ended up in law and has worked as a legal executive in both Reading and Leeds, where he now lives. Married, he is a keen live role-player and occasional amateur actor and has trained in stage-fighting. He's the author of Children of Time, the winner of the 30th Anniversary Arthur C. Clarke Award, and the Sunday Times bestseller Shards of Earth.

"Tchaikovsky livens up the tale with intrigue, duels and menagerie of horrifying creatures... The scale of the story expands well beyond the confines of [prison drama], bringing in subterranean adventures, themes about class war and political corruption, and genetic engineering... Set in a dying world where death hovers impatiently over everyone's shoulder, Cage of Souls is a frequently grim read, but it's a compelling journey." —SFX

"Grotesque and beautiful all at once... A brilliant examination of extremes and the way in which humanity always finds a way to navigate them. Even when others are hell bent on self-destruction." —SciFiNow

"Once again Tchaikovsky astounds with his boundless imagination and versatility in his craft." —Worlds in Ink