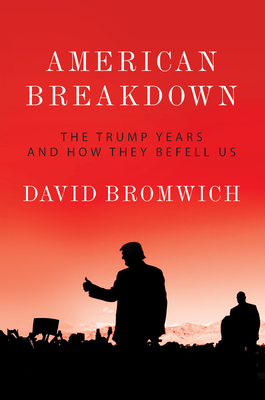 Donald Trump’s residency in the White House is not an accident of American history, and it can’t be blamed on a single cause. In American Breakdown, David Bromwich provides an essential analysis of the forces in play beneath the surface of our political system. His portraits of political leaders and overarching narrative bring to life the events and machinations that have led America to a collective breakdown.

The political conditions of the present crisis were put in place over fifty years ago, with the expansion of the Vietnam War and the lies and coverups that brought down Nixon. Since then, every presidency has further centralized and strengthened executive power. The truly catastrophic event in American life was the invention by George W. Bush and Dick Cheney of the War on Terror, designed to last for generations. Barack Obama’s practice of “reconciliation without truth”—sparing CIA torturers and Wall Street bankers—deepened the distrust and anger of an electorate that has rallied around Trump.

An unsparing account of the degradation of US democracy, American Breakdown is essential to our evaluation of its prospects. Arguing that Trump’s re-election seems just as likely as impeachment, Bromwich turns his attention to the new struggles within the Democratic Party on immigration, foreign policy, and the Green New Deal.

American Breakdown will be a crucial reference point in the political debate around the upcoming presidential election—a contest in which the forces that created Donald Trump show no sign of letting up.

David Bromwich is Sterling Professor of English at Yale University and the author most recently of The Intellectual Life of Edmund Burke, Moral Imagination, and Skeptical Music.

“David Bromwich is our elegant American muse, our Boswell, whose incisive and caustic reporting on the political scene and the presidency often evokes Hunter S. Thompson. There is much to learn, and enjoy, in American Breakdown.”
—Seymour M. Hersh

“One of the most incisive writers in America today.”
—Edward Mendelson

“Bromwich is particularly sharp on the way government spokesmen wrap the realities of massacre, torture, and gratuitous cruelty in euphemism … A critic in the tradition of Hazlitt and Orwell.”
—Alan Ryan