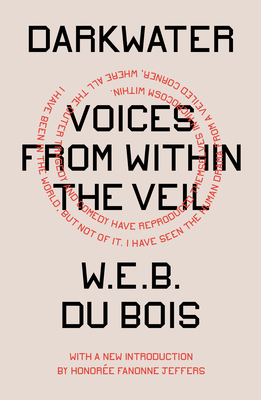 A new edition of the classic work of Black history and politics with a new introduction by award-winning poet and novelist Honorée Fanonne Jeffers.

“I have been in the world, but not of it,” begins this searing and passionate book by legendary scholar W.E.B. Du Bois. A continuation of his celebrated work The Souls of Black Folk, Darkwater describes the devastation of segregation, slavery, and the global color line that veiled half the world’s people in shadow.

First published in 1920, Darkwater gives voice to the rising power of the “darker races” around the world; it frames Africa’s blistering indictment of Europe in a study of the curious and twisted souls of white folk; and it includes Du Bois’s landmark essay “The Damnation of Women,” in which he explores gender inequality and the double burdens forced onto black women. Combining essays and analysis with poetry, allegory, and short fiction, Darkwater is an angry and eloquent argument that, as Du Bois writes, “a belief in humanity is a belief in colored men.”

This beautiful edition includes a new introduction from award-winning poet and novelist Honorée Fanonne Jeffers and a historical preface by historian Manning Marable.

W.E.B. Du Bois was an American sociologist, historian, civil rights activist, Pan-Africanist, author, and editor. He was one of the co-founders of the National Association for the Advancement of Colored People (NAACP) in 1909. He is the author of numerous books, including the seminal The Souls of Black Folk and his 1935 magnum opus Black Reconstruction in America.

“Du Bois essentially defined black America in the 20th century with his notion of ‘double consciousness’—the idea that African Americans experience everything in this world both as Americans and as black people. Scholars have come up shaky in their efforts to update Du Bois’s simple, but ingenious formula.”
—Ta-Nehisi Coates

“[Du Bois was] the greatest of the early civil-rights leaders, a figure of towering significance in American politics and letters … Remembered for his single-minded commitment to racial justice and his capacity to shape black consciousness, Du Bois used language and ideas to hammer out a strategy for political equality and to sound the depths of the black experience in the aftermath of slavery.”
—Stuart Hall

“The greatest of the early civil-rights leaders, a figure of towering significance in American politics and letters.”
—Guardian

“Du Bois’ philosophy is significant today because it addresses what many would argue is the real world problem of white domination.So long as racist white privilege exists, and suppresses the dreams and the freedoms of human beings, so long will Du Bois be relevant as a thinker, for he, more than almost any other, employed thought in the service of exposing this privilege, and worked to eliminate it in the service of a greater humanity.”
—Donald J. Morse

“Advocate, statesman, negotiator, defender,champion, ambassador, griot, and peerless challenger of the system, Du Bois was all these things and more of—and for—our national self … He was the best prime minister we ever had for our State That Never Was.”
—Bill Strickland

“In 1920 W.E.B. Du Bois’s Darkwater: Voices from Within the Veil issued a call for an anti-colonial, internationalist approach to historical and social science scholarship.”
—Dialectical Anthropology

“The lasting power of Darkwater’s democratic vision … consists not only in what Du Bois is able to see; it also encompasses what he enables readers to see anew – and, possibly, both differently and further than Du Bois himself.”
—Lawrie Balfour, Political Theory

“In Darkwater DuBois writes what appears as a guide for ‘colored men and women’ on childrearing. But, as it concerns the residents of the future, it is, in fact, a revolutionary political agenda.”
—The New Centennial Review