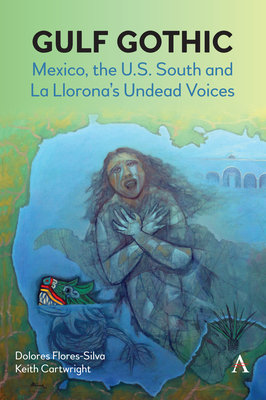 Gulf Gothic moves through deep time across languages and borders, presenting haunted, secret-laden narratives that emerge from the gulfs between people all along the Gulf of Mexico and on both sides of the Rio Grande. Collaborating in an interdisciplinary manner, literary and cultural critics Dolores Flores-Silva and Keith Cartwright chart the Gulf as a unified region and ground zero of North American (and global) transculturation.

The Gulf of Mexico has been inadequately appreciated as the dynamic transnational region that it is (taking in the Gulf states of Mexico and the U.S., as well as western Cuba), a cultural matrix that nourished the spread of maize agriculture and the rise of a two-thousand-year-old literary historical tradition that has responded to traumas of colonial conquest and plantation slavery. In this study, the Gulf signifies metaphorically and symbolically--as undead space of contacts and supposed impasses between peoples--as well as topographically. Its gothic modalities carry an urgent charge that demands to be addressed in holistic form

Gulf Gothic addresses modes of representing all that is blocked from free movement and aspiration. Here, the figure of La Llorona haunts boundary waters and shorelines, voicing much that has been occulted by colonial power and national narrative. La Llorona's Indigenous prototypes, plantation/hacienda atmospherics, and heated storm patterns show up repeatedly in variations of an originary undeadness unconstrained by attempted quarantines and border walls. The authors turn to cinematic horror and the double gaze of ancient Maya texts, to folk-fable and legal documents and popular song, as well as to works by Gloria Anzald a, Sandra Cisneros, Leslie Marmon Silko, Joy Harjo, LeAnne Howe, Kate Chopin, James Weldon Johnson, William Faulkner, Carlos Fuentes, Vicente Riva Palacio, Jesmyn Ward, and Fernanda Melchor, to attend to forces unbound by traditional gothic modalities and their foundational gulfs.