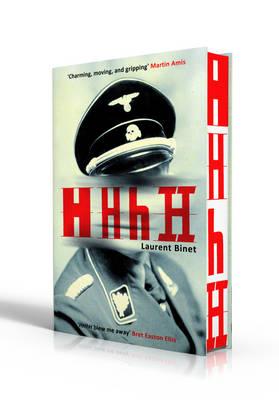 Laurent Binet's "HHhH, winner of the "Prix Goncourt du Premier Roman, is "a work of breadth, and absolute originality" (Claude Lanzmann)
Everyone has heard of Reinhard Heydrich, "the Butcher of Prague." And most have heard stories of his spectacular assassination at the hands of two Czechoslovakian partisans. But who exactly were the forgotten heroes who killed one of history's most notorious men? In Laurent Binet's captivating debut novel, "HHhH "("Himmlers Hirn heiBt Heydrich," or Himmler's brain is called Heydrich), we follow the lives of Jozef Gabcik and Jan Kubis, the Slovak and the Czech responsible for Heydrich's death. From their heroic escape from Nazi-occupied Prague to their recruitment by the British secret services; from their meticulous preparation and training to their harrowing parachute drop into a war zone; from their stealth attack on Heydrich's car to their own brutal deaths in the basement of a Prague church, Binet narrates the compelling story of these two incredible men, rescuing their heroic acts from obscurity. The winner of the prestigious Prix Goncourt du Premier Roman, Binet's "HHhH "is a novel unlike anything else. A seemingly effortless blend of historical truth, personal memory, and Binet's remarkable imagination, "HHhH "is a work at once thrilling and deeply engrossing--a historical novel and a profound meditation on the nature of writing and the debt we owe to history.

Laurent Binet was born in Paris, France, on July 19, 1972. He graduated from Sciences Po, the CELSA Paris (DESS), and the University of Kent, where he completed an MA in European studies. He is the author of "La Vie professionnelle de Laurent B., "a memoir of his experience teaching in secondary schools in Paris. In March 2010, "HHhH "won the Prix Goncourt du Premier Roman. Binet is a professor at the University of Paris III, where he lectures on French literature.
My Account • Sign In • Sign Out • Register
NEW & USED BOOKS
AUTHOR EVENTS • GIFTS
Changing Hands Tempe
6428 S McClintock Dr, Tempe, AZ 85283
480.730.0205
[Google Map]
Sun-Sat: 10am-7pm