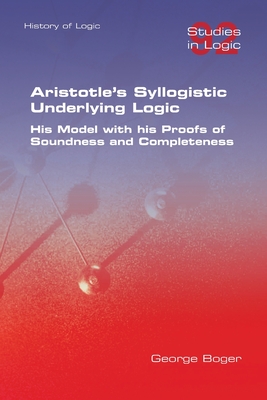 Aristotle's Syllogistic Underlying Logic is a ground- breaking and thorough study of Aristotle's logic, including a new translation of select chapters of Prior Analytics that treat the logic's formal components. This study shows that Aristotle consciously modeled his Underlying Logic, that Prior Analytics is a metasystematic discourse with its own underlying logic. The author clearly demonstrates that Aristotle conceived his logic as natural by explicating his notion of human cognition, central to which is his epistemic concern with syllogistic mediation that restricts a syllogism to two premises.

The study further represents Aristotle's philosophy of logic as having a fully developed ontology that underlies the epistemics of syllogistic argumentation. It identifies his distinctions between syntax and semantics and provides his definitions of logical consequence and deducibility to demonstrate his metasystematic sophistication. The study carefully sets out Aristotle's metasystematic analyses and his proof-theoretic demonstrations of the logic's soundness and completeness.

Unlike previous scholarship, this study works with the entire corpus of the Organon - inclusive of On Expression, Predications, Topics, Sophistical Refutations and chapters of Metaphysics - to assemble Aristotle's underlying logic in Aristotle's own words with extensive citation of primary texts. The translations are accompanied by the original Greek texts that serve as a ready resource for comparative analyses. For the translation of Prior Analytics, the Greek text and the translation appear on facing pages. The author includes a set of principles used for making the translation.

An especially innovative feature of the new translation is to block passages of the text and to insert subsection titles that help (1) to elucidate Aristotle's meaning, (2) to indicate the movement of his thinking, and (3) to reveal the careful and systematic character of his logical investigations.

The reader will find, in one volume, a thorough and meticulous examination of the full compass of Aristotle's logical investigations that establish him as the founder of formal logic.