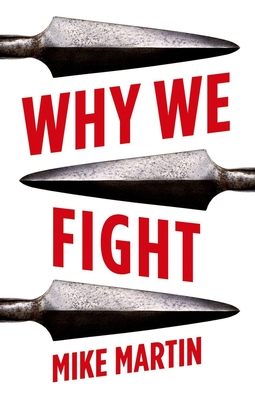 Why are we willing to die for our countries? Does religion precipitate violence? Do pride, anger and vengeance lead to war? Can ideology persuade someone to blow themselves up? This ground-breaking book explores how tens of thousands of years of evolution have shaped our brains to fight, and not to fight. Drawing on insights gleaned as a soldier and a scholar, and a biologist, Mike Martin explains how the lives and deaths of our ancestors have shaped our behavior to propel us towards conflict, even as that option makes less and less sense. Why We Fight highlights the continuums between animal and human individual violence and explains how mankind has massively reduced the preponderance of warfare by creating larger and larger social groups. Together, these arguments form a compelling demonstration of humans' evolutionary predisposition to warfare, rooted in a prehistoric past when going to war actually increased your chances of survival. Our contemporary world is marked by the disintegration of social groups, which inevitably increases the likelihood of conflict -- yet, Martin concludes, humans may still ultimately outlive warfare altogether, consigning it to history.

Mike Martin is a visiting research fellow at the Department of War Studies, King's College London, having previously studied biology at Oxford. Between these experiences, he served as a British Army officer in Afghanistan. His previous books include An Intimate War: An Oral History of the Helmand Conflict and Crossing the Congo: Over Land and Water in a Hard Place, the latter of which was shortlisted for the Edward Stanford Adventure Travel Writing Award in 2016.