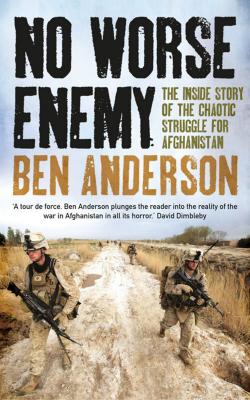 The most comprehensive and gripping account of the Afghan war, by a BBC journalist.

The war in Afghanistan is over ten years old. It has cost countless lives and hundreds of billions of pounds. Politicians talk of progress, but the violence is worse than ever.

In this powerful and shocking exposé from the front lines in Helmand province, leading journalist and documentary-maker Ben Anderson (HBO, Panorama, and Dispatches) shows just how bad it has got. Detailing battles that last for days, only to be fought again weeks later, Anderson witnesses IED explosions and sniper fire, amid disturbing incompetence and corruption among the Afghan army and police. Also revealing the daily struggle to win over the long-suffering local population, who often express open support for the Taliban, No Worse Enemy is a heartbreaking insight into the chaos at the heart of the region.

Raising urgent questions about our supposed achievements and the politicians’ desire for a hasty exit, Anderson highlights the vast gulf that exists between what we are told and what is actually happening on the ground. A product of five years’ unrivalled access to UK forces and US Marines, this is the most intimate and horrifying account of the Afghan war ever published.

Ben Anderson is an acclaimed journalist and documentary film-maker. In a career spanning fourteen years, he has filmed, presented, and produced over forty films for the BBC, Channel 4, HBO, and the Discovery Channel. He has presented five of his own series for BBC2, fronted four programmes for Panorama, and one for Dispatches, and was twice a finalist for the RTS Young Journalist of the Year award. In addition, he has written for The Times, GQ, and the London Review of Books. When not reporting from the field, he lives in London.

Similar to Michael Herr's high-octane Vietnam War classic, Dispatches, Anderson delivers a gritty, brutal, realistic account of British and American troops on the Afghan frontlines in a bitter counterpoint to all the policy concessions and peace chatter.
— Publishers Weekly

"Unusually courageous… With humor, compassion and a fine eye for detail, Anderson meticulously pieces together each scene with the skill of a good choreographer… [This is] an engrossing blow-by-blow account of the nuts and bolts of modern warfare."
— Kirkus Reviews

Anderson's book makes a vivid contribution to the record of the conflict, and left me gasping at his courage.
— Max Hastings for The Sunday Times

"An essential if unsettling synopsis that brutally strips away any pretence that this is a just or even necessary conflict ... Highly recommended for those with even a passing interest in what is being done in our name in far-off Afghanistan."
— Military History Monthly

"Wonderful… offers real insight into the war."
— The Sun

If you want to understand how the war in Helmand is really being fought, buy this book.
— Alex Strick van Linschoten - Author of An Enemy We Created and My Life with the Taliban

Candid and honest. An invaluable perspective for those who want to know the real story.
— Ed Darack - Author of Victory Point

Take it from a guy who's been there, done that, and got the tshirt, Anderson hits the nail on the head on how the war feels, tastes, and frustrates the soldiers tasked with fighting it.
— Benjamin Tupper

"The best book from the frontline so far... Will do for Afghanistan what Michael Herr's Dispatches' did for Vietnam. If you thought it was bad in Helmand, you were wrong. Anderson shows that it is much worse than that."
— Frank Ledwidge - Bestselling author of Losing Small Wars: British Military Failure in Iraq and Afgha

"A tactile, gripping first-hand account of the heroic yet tragic efforts of allied troops to drive out the Taliban. A powerful read."
— Bing West - Former Assistant Secretary of Defense, a Marine combat infantryman, and prize-winning au

"Ben Anderson is the bravest journalist I know. Anyone interested in what life is really like on the front line in Afghanistan should read this book."
— Louis Theroux

“A tour de force. Ben Anderson plunges the reader into the reality of the war in Afghanistan in all its horror. The stories he brings back are as vivid an account of the war and its almost insurmountable difficulties as any I have read.”
— David Dimbleby

The truth about the Afghan war, from a brave and exceptionally honest reporter... Essential reading for anyone who wants to know what is really going on in Helmand.
— Sherard Cowper-Coles - Former British Ambassador to Afghanistan

"Hugely revealing … A brilliantly observed account of war in Afghanistan by an extraordinarily brave reporter."
— Jason Elliot - Author of An Unexpected Light: Travels in Afghanistan