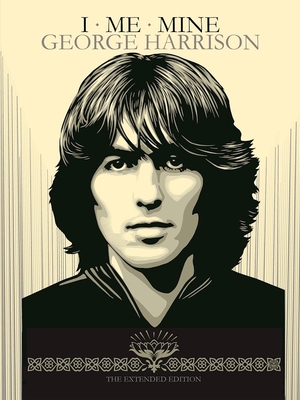 This book is a must have for anyone interested in, not only the Beatles or George Harrison, but music and creativity itself. It vividly illustrates the spiritual development of an artist alongside his work, in his own words and those of the people closest to him. Unlike the earlier George Harrison: Living in the Material World, which was released in tandem with the documentary by Martin Scorsese, this book is almost less about the man himself and more about his works--which is fitting given that the title I Me Mine is a reference to the human ego, which Harrison sought to be free of through his spirituality. There are pages of lyrics to 141 of his songs alongside his explanations of their meanings and inspirations, which range from single paragraphs and several sentences in length to pages worth of explanations which discuss his thoughts on the Law of Karma, living, dying, and enlightenment in illuminating detail. — From Salvatore's Picks

"For me, the essence of this book is the lyrics and I believe they stand the test of time because they are written about man's eternal quest, dilemmas, joys and sorrows. George's lyrics were, in my opinion, the most spiritually conscious of our time" - Olivia Harrison

Cherished by fans and collectors, I Me Mine is the closest we will come to George Harrison's autobiography. This new volume has been significantly updated since the 1980 original. For the first time I Me Mine - The Extended Edition covers the full span of George Harrison's life and work, exploring his upbringing in Liverpool, the growth of Beatlemania, his love of India, gardening and racing cars.

I Me Mine also presents 141 of George Harrison's songs. With lyrics handwritten and reproduced in facsimile, accompanied by his uniquely intimate and humorous commentary, this new edition of I Me Mine now includes more than 50 additional lyrics written for the Beatles and Harrison's solo albums -- from All Things Must Pass to Brainwashed.

With written contributions from Olivia Harrison and Derek Taylor, original cover art by Shepard Fairey, and a wealth of previously unpublished material, I Me Mine -The Extended Edition is a treasured portrait of George Harrison and his music.

"Writing a song is like going to confession... writing songs to try and find out who you are." -George Harrison

"A book which tells the story of growing up, not necessarily the hard way but certainly not the easy way, for no matter how greatly privilege and wealth may have seemed to grace the Beatles' evolution, 'easy' is not the word for what happened to them on their way to what has come to be known as The Top." - Derek Taylor

George Harrison (1943-2001) joined the band that would become The Beatles in 1958, when he was just 14. His richly varied solo career as both musician and producer began with the acclaimed album All Things Must Pass and included the landmark Concert for Bangladesh, considered the first fund-raising rock show, as well as collaborations with musicians such as Ravi Shankar and The Traveling Wilburys. He is also remembered as the producer of such films as Monty Python's Life of Brian and Mona Lisa. George Harrison married Olivia Arias in 1978 and together they have a son, Dhani.
My Account • Sign In • Sign Out • Register
NEW & USED BOOKS
AUTHOR EVENTS • GIFTS
Tempe
6428 South McClintock Drive
480.730.0205
[Google Map]
10am-7pm daily
Trade Counter 11am-6pm daily