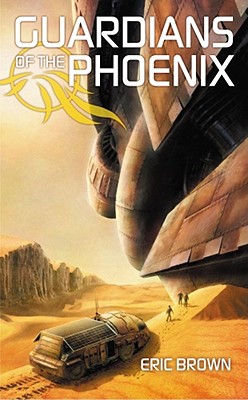 For ten years, Paul has scrabbled for survival among the sand-shrouded ruins of the once-great city of Paris. The seas have dried up, deserts cover much of the Earth's surface, and humanity has been all but annihilated, as much by the drought as by the nuclear and biological conflicts following the great Breakdown.

Desperate bands of humans still survive. Some scrape a living in the remains of shattered cities; others resort to murder and cannibalism to survive. When Paul is rescued from one such group of killers, he joins his benefactors in their journey south in search of water and salvation.

Guardians of the Phoenix tells the story of the last survivors on planet Earth, their desperate fight for survival and their last hope to save the world.

Eric Brown began writing when he was fifteen and sold his first short story to Interzone in 1986. He has won the British Science Fiction Award twice for his short stories, and his novel Helix Wars was shortlisted for the 2012 Philip K. Dick award. He has published over fifty books, and his latest include the crime novel Murder at the Loch, and the SF novel Jani and the Great Pursuit. He has also written a dozen books for children and over a hundred and thirty short stories. He writes a monthly science fiction review column for the Guardian newspaper and lives in Cockburnspath, Scotland.