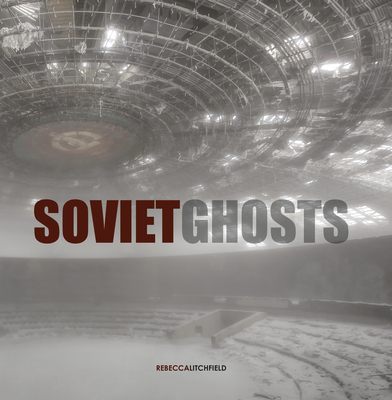 In Soviet Ghosts, photographer Rebecca Litchfield captures the broken buildings and abandoned places of a once vast Soviet Union. Combining her striking photographs with essays about the towns and cities that comprised the Soviet Union, Litchfield gives readers a comprehensive overview of how these places have fallen to decay and the purpose they served when the Soviet Union was at its peak. I'd highly recommend this book to those who have a fascination with history, photography, or both!

Only the most intrepid urban explorers cross the tattered ruins of the old iron curtain to endure the excessive bureaucracy, military paranoia and freezing winds of the East to hunt for the ghosts of an empire. Rebecca Litchfield is one who couldn't resist the haunting allure of the ruins of the Soviet Union. Time and again she risked radiation exposure, experienced arrest and interrogation, and was accused of espionage while collecting the stunning photography in Soviet Ghosts. Join her on an adventure through the ruins of soviet bloc, never before seen by western eyes. The emotional affect of this poetic collection will keep you coming back for more, while a series of expert articles offer in-depth analysis of the historical context. Contemplate the uncanny and disturbing emotional power of the imagery. Discover the story of the rise and fall of the USSR, the empire whose ghost continues to haunt Europe even today... Features ●A breathtaking collection of images from Pripyat, Chernobyl ●Stunning imagery of a vast, ruined Bulgarian communist monument. ●A road trip through the ruined abandonment in East Germany, Ukraine, Bulgaria, Hungary, Czech Republic, Slovakia, Latvia, Estonia, Lithuania, Croatia and Russia featuring decaying hospitals, military barracks, prisons, spy stations and sports halls and more. Photographer Rebecca Litchfield captures many abandoned locations, which were either part of the Soviet Union or occupied satellite states during this period of history, including forgotten towns, factories, prisons, schools, monuments, hospitals, theatres, military complexes, asylums & death camps across the former communist states. These photographs deliver a compelling narrative of both moral bankruptcy and flawed ideology. Featuring stunning imagery throughout, this compelling road-trip through the old USSR, breathes new life into these forgotten places, finding both beauty and meaning in their post-apocalyptic decay. Extended essays by Tristi Brownett, Neill Cockwill and Professor Owen Evans, offer considerable contextual depth to the locations imbuing them with a wealth of connection and wonder. By virtue of its holistic approach, the book also explores how and why these once thriving communities became abandoned, whether by natural disaster, man-made catastrophe or simply through the march of time.
My Account • Sign In • Sign Out • Register
NEW & USED BOOKS
AUTHOR EVENTS • GIFTS
Changing Hands Tempe
6428 S McClintock Dr, Tempe, AZ 85283
480.730.0205
[Google Map]
Mon-Fri: 10-9 | Sat: 9-9 | Sun: 10-6