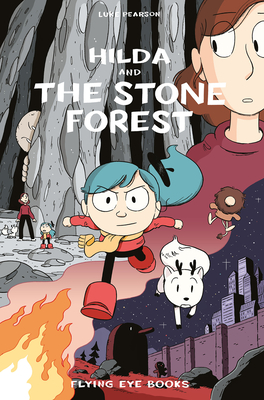 This is book number 5 in the Hildafolk series.

WATCH SEASONS ONE AND TWO OF HILDA THE ANIMATED SERIES NOW ON NETFLIX!

"Luke Pearson is one of the best cartoonists working today. Hilda is utterly brilliant!"
—Raina Telgemeier, creator of Smile

Hilda may be grounded, but that won’t stop her from heading off on another daring adventure! But everything is thrown off course when her mother catches her and is dragged along for the ride. Furious with each other, the bickering pair find themselves lost in the land of the trolls, forced to embark on a dangerous journey to make their way home. And to make matters even more difficult, Hilda has to do so . . . as a troll? Buckle your seatbelts for a crazy body-swapping adventure!

Luke Pearson is the artist and writer of the Hilda series of graphic novels. He has fast become one of the leading talents of the United Kingdom and United States comics scene, garnering rave reviews from the New York Times and the School Library Journal. He was the winner of the Young People's Comic category at the British Comic Award in 2012, and he has been nominated for the Eisner Award's Best Publication for Kids and Best Writer/Artist in 2013. He has recently written and storyboarded multiple episodes of the cult classic show Adventure Time. He lives in Bristol, United Kingdom.

Hilda is now on Netflix! Season 1 is the WINNER of the BAFTA Children's Award for Best Animated Series 2019! Season 2 is out now!

"Luke Pearson is one of the best cartoonists working today. Hilda is utterly brilliant!"
—Raina Telgemeier, creator of Smile

"Luke Pearson's Hilda stories are beloved in our house, and they will surely be enjoyed by audiences for many years to come."
—Kazu Kibuishi, creator of Amulet

"In Hilda, Luke Pearson has created a truly odd and amazingly beautiful world—Stunningly personal and original. I am in awe of his imagination. He is a real inspiration."
—Mike Mignola, creator of Hellboy

"Pearson’s utter lack of pretension keeps Hilda feeling fresh, while his reading of folktales and Tove Jansson’s Moomin series embeds Hilda in the long history of children’s stories. […] Hilda’s dilemmas, while fantastic, also feel real […] Pearson has found a lovely new way to dramatize childhood demons, while also making you long for your own cruise down the fjords."
—The New Yorker

"An imaginative, heartwarming, beautifully illustrated tale that all ages can enjoy. Exploring the relationship between Hilda and her single mother, it’s a great read for parents and their children, providing plenty of visual stimulus for younger readers in the context of an engaging narrative with a strong emotional foundation."
—AV Club

"Pearson has perfected Hilda's Scandinavian-style fantasy world, and his artwork is as captivating as ever."
—Booklist, STARRED REVIEW

"Luke Pearson’s Hilda books are the most imaginative, most inspiring, and most beautiful all-ages stories published in the past decade. […] This newest volume […] is the best yet, suggesting that Hilda may join Tintin and the Moomins as comic-book immortals."
—Slate, Slate's 10 Favorite Comics of 2016

"FIVE STARS […] Another stunner in the episodes of Hilda."
—Youth Services Book Review

"With a wonderfully expressive color palette and ever-sterling eye to quiet, unblemished storytelling, Pearson’s latest stands proudly among his other works. We look at works like Tintin as being distant memories of faded comics greatness; but Hilda is a series which surely will one day be looked at as a successor to the works of people like Herge, and a future classic in its own right."
—Comics Alliance

"Hilda is such a smart, delightful and relatable character for adventurous young girls to read about."
—Mental Floss

"a significant turning point in the series […]Pearson's proven that this isn't a series of books that repeat actions from episode to episode, but rather a coherent serial that's slowly building to something more fantastic, calling back to old characters and details that may not have seemed important when they were introduced."
—Rob Clough