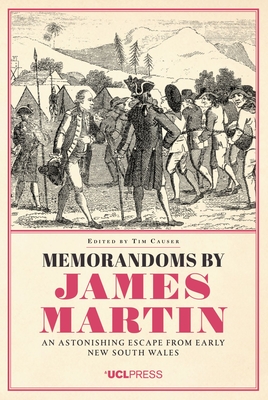 By Tim Causer (Editor)
Email or call for price

On the night of March 28, 1791, James Martin, William Bryant, his wife Mary, and their two children, along with six other male convicts—among the first cohort of prisoners sent to Australia from England— stole a small boat from Sydney Harbor and sailed up the coast of Australia. They reached East Timor on June 5. Once there, they posed as survivors of a shipwreck, until they were eventually discovered and ordered back to England. The Memorandoms of James Martin is the only known chronicle written by members of that first group of prisoners, and this convict narrative is also the only firsthand account of the best-known Australian convict escape. This document, confirmed in its details by careful scholarly analysis, clarifies one of the most important origin stories of Australian history.

Tim Causer is senior research fellow at the Bentham Project, UCL Faculty of Laws. He is the editor of Memorandoms by James Martin.

Causer’s impressive introduction contextualises the Bryants’ escape—though extraordinary in some respects—within a broader timeline of convict resistance to colonial authorities. He builds on existing historiography, to show that absconding into the bush or escaping in a boat was a logical and not uncommon form of resistance in early New South Wales . . . Causer’s account is refreshingly transparent about exactly what evidence is available and what can be reasonably assumed, which serves as an important counterbalance to much 'unevidenced embroidering and embellishment of the historical record' in the past about the escape. This technique is also used to explain—rather than just call out—the many inaccuracies that have arisen about the Byrant party in the historical record. Causer’s meticulous tracing of the convict absconders through the archives, from their conviction to their release from Newgate, is a great strength of this edition. . . . Causer’s edition allows James Martin’s Memorandoms to shine as a primary source, but it also reveals the limitations of the archival record."
— Journal of Colonialism and Colonial History