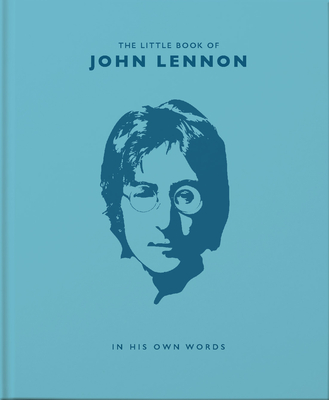 This is book number 5 in the Little Book Of... series.

Born 9 October 1940 in Liverpool, John Lennon was a walking, talking, quote machine. Every time he opened his mouth, genius fell out. To celebrate this simple, glorious truth, The Little Book of John Lennon is here to remind you what a legend sounds like.

From his days down in the dumps as a Liverpudlian scamp to his tenure in the world's greatest beat combo to his post-Beatles bed-ins and living for peace, love and understanding, The Little Book of John Lennon speaks the truth as Lennon himself lived it. Imagine a world with no John Lennon - it's easy if you try. But, why in the world would you want to? This is John Lennon at his best, and in his own words

'If everyone demanded peace instead of another television set, then there'd be peace.' John talking about materialism and peace. As seen on Independent.co.uk, December 8, 2016

'We live in a world we have to hide to make love, while violence is practiced in broad daylight.' John talking about the 1970s and the Vietnam War. As seen on Irish Post, October 2009

'I've always considered my work one piece and I consider that my work won't be finished until I am dead and buried and I hope that's a long, long time.' John discussing his legacy while being interviewed on RKO Radio, December 8, 1980 (the day he was murdered). As seen on Beatles Archive.net, December 21, 2013.