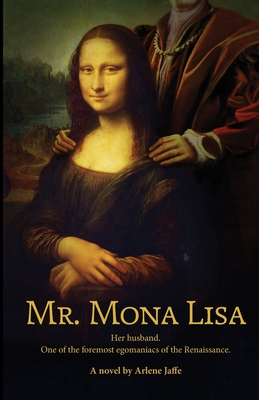 He tells Leonardo DaVinci exactly how to paint a portrait of his young wife. Her pose, her wardrobe, her hairstyle, even the background technique. He values the status and bragging rights of owning the masterpiece over the masterpiece itself. He is paying, after all. And it was his idea in the first place. So. Who is Francesco Giocondo? A real noble's noble. More than a Florentine power player oozing arrogance from every fiber of his being, Francesco believes his social position is far beyond being "Mr. Mona Lisa"---A story (not history) that didn't happen. But it could have.

Arlene Jaffe has surprised many people. Including herself. At age five, Arlene's first written monologue was from an indignant monkey launched into space. She's come a long way since; with short plays, long plays and everything in between; plus movie treatments, scripts, scenes and song lyrics. Even during her long and much-awarded career as an advertising creative director, Arlene continued to explore her own writer's journey with all its twists and turns. Her passion has always been discovering obscure people, places and things ...then digging for any information that might exist...then turning that research on its head for the most dramatic effect. Finally, Arlene knew it was time for less selling and more storytelling. So she became a free agent/creative consultant. The result? This is just a partial list: Arlene's stage plays: Anonymous, Search And Rescue, Surrounded, The Rock Eater, North Bend, Rita Shalimar, The River Sambre, ElliEli, Wine and Cookies, Anything You Want, Emigrant, The Keys, King, Lou and Linnie. Arlene's screenplays: The One In The Middle, The Separators, The Legend of the Lost Intransitu. Arlene Jaffe is a member of The Dramatists Guild and lives in New York's Greenwich Village. Mr. Mona Lisa is Arlene Jaffe's first novel.