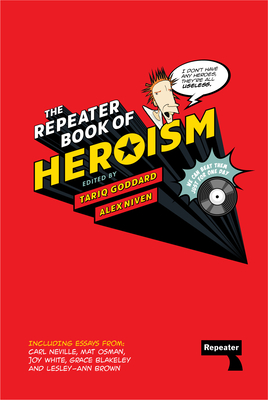 In these impactful first-person essays, a selection of Repeater authors come together to write about what heroism means to them, trying to imagine a new kind of hero figure for the twenty-first century.

As a spokesperson of sorts for the punk generation, Lydon was giving voice to a nihilistic, deconstructive impulse which, for better or worse, would go on to dominate the next half-century or so of intellectual, cultural and political life. But isn’t one of the problems with the modern world that we no longer have any real sense of what heroism is? What if we recovered heroism from the hands of the fascists and the neoliberal ideologues, and proclaimed that – despite everything – a hero can and should be something to be?

In these personal, provocative essays, the authors behind the uncompromising project that is Repeater Books come together to redefine the idea of the hero for a twenty-first-century public which desperately needs something to believe in. From Eric Cantona to Wile E Coyote, Bruno Latour to Paula Rego, forgotten legends and anonymous family members, this compendium of extraordinary human behaviour is essential reading for anyone who has ever thought that, despite what Jean-Paul Sartre said, heaven is other people.

Tariq Goddard is an award-winning novelist and the publisher of Repeater Books.

Alex Niven lectures at Newcastle University and is the author of New Model Island.