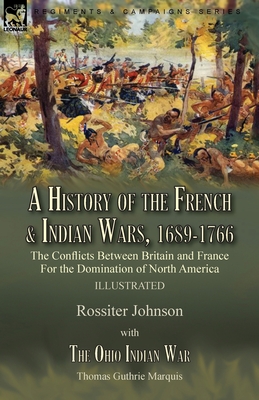 A century of warfare to claim a continent

This unique Leonaur book provides an overview of all the conflicts in North America during the later 17th and 18th centuries, to the close of the Seven Years' War and on the Western frontier prior to the American Revolution. The overarching issue during this period was which European power, Britain or France, would succeed in dominating that part of the Americas. Each side had its own regular troops and locally raised militias, together with distinctive Native-American allies divided by the deep enmity between the Huron and the Iroquois nations. In these pages the reader will chronologically follow the bloody warpath through King William's War, Queen Anne's War, King George's War, the fighting in the Ohio Valley, Braddock's Defeat, the Battle at Lake George, the fall of Louisbourg, and the struggles for the frontier forts including William Henry, Ticonderoga, Frontenac and Du Quesne. Johnson's account concludes with the campaign that led to the fall of Quebec and French defeat in Canada. To provide context this book also includes an account of the Ohio Indian War led by the Ottawa war chief, Pontiac, which broke out in 1763 and led to the final expulsion of French forces from North America. Contains maps and illustrations.

Leonaur editions are newly typeset and are not facsimiles; each title is available in softcover and hardback with dustjacket.