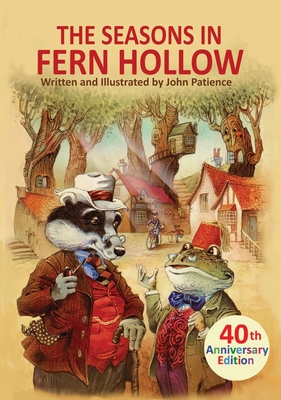 40th Anniversary Edition. This title was the forerunner to the Tales from Fern Hollow series which eventually ran to 16 titles and was published in many languages and territories. Written and illustrated by English author/illustrator, John Patience, this book takes us on a visit to the village of Fern Hollow, tucked away somewhere in the countryside of Edwardian England. 64 pages of detailed, colourful and cheerful illustrations introduce us, through the seasons of the year, to some of the animal characters who went on to appear in the four series that followed through the 1980s and 1990s.

The map on the endpapers helped children find their way around the village and appeared in every single title in the Fern Hollow series. Children really loved the map and enjoyed pointing out where all their favourite Fern Hollow Characters lived and all the stories took place.

These gently humorous stories of animal folk have an enduring charm. A generation of people who had the Fern Hollow stories read to them as children have now grown up and are buying the books to read with their own children. Parents who read the books with their children back in the 1980s and 1990s are now enjoying them all over again with their grandchildren.