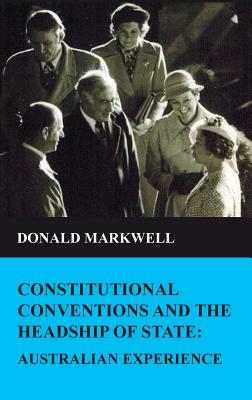 Constitutional systems frequently depend upon conventions - unwritten rules based on principle and precedent - to guide their operation, including regarding the role of the head of state. The Queen is Australia's head of state, with her Australian federal representative, the Governor-General, serving in day-to-day practice as a de facto head of state. Papers in this volume discuss conventions and other practice relating to the Crown in Australia's Westminster-style system of government responsible to Parliament. Papers consider the -Australianisation- of the Crown since federation in 1901, the evolution of a modern Australian office of Governor-General (exemplified by Sir Zelman Cowen, Dame Quentin Bryce, and others), and the continuing debate on an Australian republic.

Controversies analysed include the exercise of the -reserve powers- by Governor-General Sir John Kerr to resolve the 1975 constitutional crisis, the long but now controversial practice of Governors-General consulting High Court judges on the exercise of their constitutional discretions, and the conventions that relate to -hung parliaments- and to ministerial resignations. These studies highlight the need for careful consideration of constitutional principles and precedents to an understanding of conventions and the office of Governor-General of Australia.