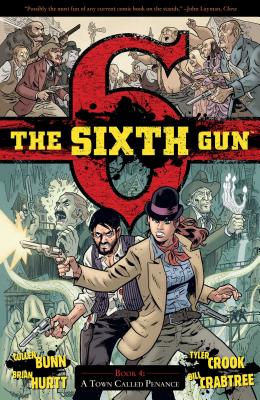 This is book number 4 in the The Sixth Gun series.

The Six. A set of cursed pistols with the power to reshape the world. The Knights of Solomon will stop at nothing to possess this power. Captured, isolated, and tortured, Drake Sinclair is offered a choice: join the Knights’ quest… or die. Meanwhile, Becky Montcrief’s search for Drake brings her to the town of Penance—a mysterious place populated by a host of twisted townsfolk. All the while, the Sixth Gun schemes, and the secrets it holds will shake the very foundations of reality.