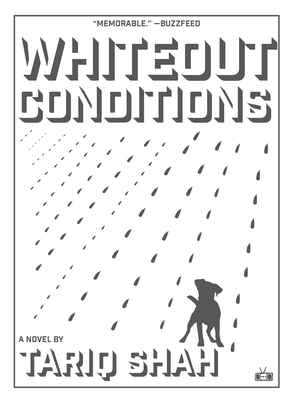 
When people list things that they enjoy, funerals generally aren't one them. Ant finds joy in attending funerals. Yet, when the cousin of his childhood friend dies Ant is less enthused about attending. On its surface, Whiteout Conditions is a road trip story set against the backdrop of Midwest Suburbia. As the story progresses it becomes more of a rumination on loss, grief, and the ghosts in our rearview mirrors. — From Quinn's picks

Ant is borderline obsessed with funerals, likening the events to weddings as gatherings he looks forward to. Yet, when a childhood friend passes, Ant's veneer starts to crumble. Weirdly funny, Whiteout Conditions tracks Ant and his friend Vince as they make their way through Chicogoland's suburbs, which, in Shah's telling, are as harrowing as any arctic climate.
--Wendy J. Fox, BuzzFeed '15 Small Press Books To Kick Off Your 2020 Reading Season'

Ant is back in Chicago for a funeral, and he typically enjoys funerals. Since most of his family has passed away, he finds himself attracted to their endearing qualities: the hyperbolic language, the stoner altar boy, seeing friends in suits for the first time. That is, until the tragic death of Ray -- Ant's childhood friend, Vince's teenage cousin. Ray was the younger third-wheel that Ant and Vince were stuck babysitting while in high school, and his sudden death makes national news.

In the depths of a brutal Midwest winter, Ant rides with Vince through the falling snow to Ray's funeral, an event that has been accruing a sense of consequence. With a poet's sensibility, Shah navigates the murky responsibilities of adulthood, grief, toxic masculinity, and the tragedy of revenge in this haunting Midwestern noir.