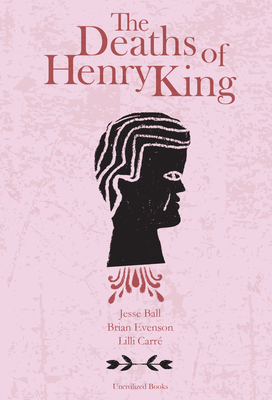 I find myself at a bit of a loss for words here.  On the one hand, I absolutely adore this book, and I want to recommend it as strongly as possible.  On the other hand, it is so morbidly twisted and absurd that you might be better off staying as far away from it as possible.  Then again, maybe you’re like me and you enjoy twisted and absurd things – if so, then look no further, because you have a real gem in front of you!  This oddball collection reads like a series of Edward Gorey comic strips, every page a funereal punchline, each death bizarre and hilarious.  I have lost count of how many times I’ve read this book at this point, and I don’t see myself stopping any time soon.    — From Jason's Picks

In The Deaths of Henry King, the hapless Henry King, as advertised, dies. Not just once or even twice, but seven dozen times, each death making way for a new demise, moving from the comic to the grim to the absurd to the transcendent and back again. With text by Jesse Ball and Brian Evenson complimented by Lilli Carr 's macabre, gravestone-rubbing-style art, Henry King's ends are brought to a vividly absurd life.

Brian Evenson is the author of a dozen books of fiction, most recently the story collection Windeye and the novel Immobility (both finalists for a Shirley Jackson Award). His novel Last Days won the ALA's RUSA award for Best Horror Novel of 2009. His novel The Open Curtain was a finalist for an Edgar Award and an International Horror Guild Award. He lives in Providence, RI, where he teaches in Brown University's literary arts department.

Jesse Ball is the author of five novels, including the forthcoming A Cure for Suicide (Pantheon, 2015), Silence Once Begun, and several others. He has received numerous awards, including a 2014 NEA Creative Writing Fellowship and the 2008 The Paris Review's Plimpton Prize. He gives classes on lucid dreaming and lying in the SAIC's MFA Writing program.

Lilli Carr is an artist living in Chicago. She has created several books of comics, including Heads or Tails (Fantagraphics), and her first children's book, Tippy and the Night Parade (Toon Books). Her work has appeared in The New Yorker, The New York Times, and Best American Comics.