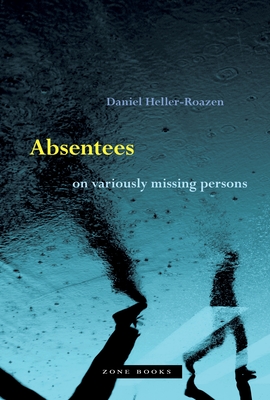 An intellectually adventurous account of the role of nonpersons that explores their depiction in literature and challenges how they are defined in philosophy, law, and anthropology

In thirteen interlocking chapters, Absentees explores the role of the missing in human communities, asking an urgent question: How does a person become a nonperson, whether by disappearance, disenfranchisement, or civil, social, or biological death? Only somebody can become a "nobody," but, as Daniel Heller-Roazen shows, the ways of being a nonperson are as diverse and complex as they are mysterious and unpredictable. Heller-Roazen treats the variously missing persons of the subtitle in three parts: Vanishings, Lessenings, and Survivals. In each section and with multiple transhistorical and transcultural examples, he challenges the categories that define nonpersons in philosophy, ethics, law, and anthropology. Exclusion, infamy, and stigma; mortuary beliefs and customs; children's games and state censuses; ghosts and "dead souls" illustrate the lives of those lacking or denied full personhood. In the archives of fiction, Heller-Roazen uncovers figurations of the missing--from Helen of Argos in Troy or Egypt to Hawthorne's Wakefield, Swift's Captain Gulliver, Kafka's undead hunter Gracchus, and Chamisso's long-lived shadowless Peter Schlemihl. Readers of The Enemy of All and No One's Ways will find a continuation of those books' intense intellectual adventures, with unexpected questions and arguments arising every step of the way. In a unique voice, Heller-Roazen's thought and writing capture the intricacies of the all-too-human absent and absented.

Daniel Heller-Roazen is the Arthur W. Marks '19 Professor of Comparative Literature and the Council of Humanities at Princeton University. He is the author, most recently, of No One's Ways: An Essay on Infinite Naming, Dark Tongues: The Art of Rogues and Riddlers, and The Fifth Hammer: Pythagoras and the Disharmony of the World.