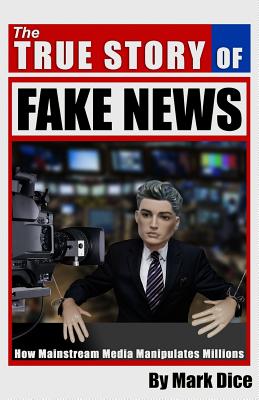 Is fake news being spread through social media as part of an information war? Are political operatives publishing disinformation to smear the opposition and help their own agendas? Who creates fake news, how does it spread, and can it be stopped? What are the real world effects of fake news stories that go viral? Did it affect the outcome of the 2016 presidential election? Or is 'fake news' a fake problem, designed to justify tighter control over the mechanisms of sharing information online to drive audiences back to brand name media outlets because their audiences and influence are dwindling? Media analyst Mark Dice takes a close look at the fake news phenomenon and the implications of mega-corporations like Facebook, Google, and Twitter becoming the ultimate gatekeepers and distributors of news and information. You will see the powerful and deceptive methods of manipulation that affect us all, as numerous organizations and political activists cunningly plot to have their stories seen, heard, and believed by as many people as possible. The depths of lies, distortions, and omissions from traditional mainstream media will shock you; and now they're colluding with the top tech companies trying to maintain their information monopolies. This is The True Story of Fake News.

Mark Dice is a media analyst and author who, in an entertaining and educational way, exposes our celebrity-obsessed culture and the role mainstream media plays in shaping our lives. Mark's YouTube channel has over 1 million subscribers and more than 300 million views, and his viral videos have been mentioned on the Fox News Channel, CNN, the Drudge Report, TMZ, the New York Daily News, the Washington Times, and other media outlets around the world. He has been featured on various television shows including the History Channel's Decoded and America's Book of Secrets; Secret Societies of Hollywood on E! Channel, America Declassified on the Travel Channel, and more. He has a bachelor's degree in communication from California State University, and is the author of 12 books.
My Account • Sign In • Sign Out • Register
NEW & USED BOOKS
AUTHOR EVENTS • GIFTS
Tempe
6428 South McClintock Drive
480.730.0205
[Google Map]
Sunday-Friday 10am-8pm
Saturday 9am-8pm
Trade Counter 11am-6pm daily