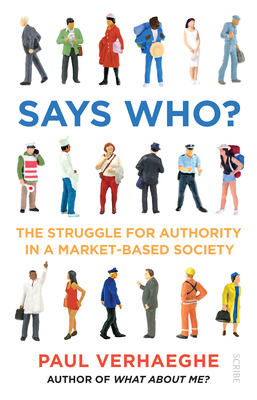 A timely examination of how authority functions, why we need it to develop healthy psyches and strong societies, and how we ourselves can take the first steps toward creating a new social order.

In his acclaimed book about identity, What About Me?, Paul Verhaeghe made this trenchant diagnosis: "We live in an extremely controlling society in which authority has disappeared...traditional authority is lapsing into brute force." Now he returns to investigate this other crucial aspect of our lives.

A great deal is going wrong these days when it comes to authority. Politics and religion have lost their credibility, and parents can no longer control the behavior of their children. Attempts to restore the authority of the past are destined to fail, and quickly degenerate into forms of pure power play.

Going against the laissez-faire ethics of a free-market age, Verhaeghe argues that rather than seeing authority as a source of oppression, we should invest in developing it in the places that matter. Only by strengthening the power of horizontal groups within existing social structures, such as in education, the economy, and the political system, can we restore authority to its rightful place. This shift is already underway, and it is producing great results.