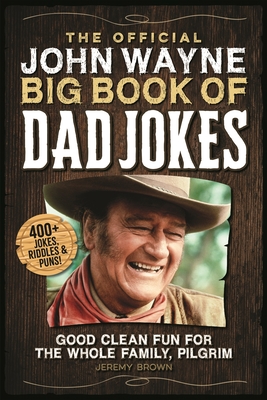 Some Good, Some Bad, Some Awful, but All Funny...

From giving as good as he got at the Harvard Lampoon to his comedic work in such films and TV shows as Donovan’s Reef, North to Alaska, Rowan & Martin’s Laugh-In, I Love Lucy, Dean Martin Celebrity Roast and The Red Skelton Hour, John Wayne was never shy about exhibiting his wry, knowing sense of humor.

It’s this facet of Duke that The Official John Wayne Big Book of Dad Jokes captures. A father of six children himself, Duke was no stranger to making kids crack up (or at least trying to).

This book presents those stories of Duke as practical joker as well as willing victim, embedded within more than 400 clever, yet dreadful jokes, stories, riddles and puns. Perfect for family members of every age! Some of the jokes are Duke- and Western-themed, but most are simply good, original Dad jokes: some good, some bad, some awful, but all funny.

Readers will also find inside nearly three dozen fun photos of Duke exhibiting his good humor for all to see, laughing with his kids or fellow actors on set and behind the scenes, making this book a treasure for fans and fathers alike.

Jeremy Brown is a writer and editor whose work has appeared in numerous publications around the world. He is a regular contributor to Fatherly.com, the leading digital media brand for dads. He has authored four biographies for young readers and written animated shorts for Dreamworks' YouTube Channel featuring such characters as Puss in Boots and Kung Fu Panda. In addition, he spent ten years working for WWE as an editor of WWE Magazine and a writer for Raw and Smackdown. He has continued working for WWE, writing dialogue for the WWE2K video games and creating a series of WWE-themed activity books for younger audiences. Additionally, Jeremy has authored two science fiction books, Ocean of Storms (co-authored with Christopher Mari) and Zero Limit. He lives in New York with his wife and sons, who've heard all of his Dad jokes by now.