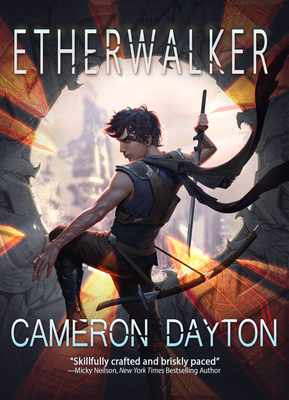 The world is broken.

The powerful machines that once ruled over land and sky are gone, leaving humanity in a state of primitive fear. Only legends of the Schism remain.

Enoch has never been frightened by these tales. He sees things differently than the other youth in Rewn's Fork, and that makes him an outcast. Where others see crops, weather, and flocks of sheep, Enoch sees numbers and patterns.

When he accidentally awakens a powerful Artificial Intelligence, he discovers the truth behind his peculiarity-Enoch is an Etherwalker, the last in a long line of powerful technopaths who can control machines with their minds.

Without knowing it, he has triggered the ancient Hunt, and now ancient monsters are hungry for his blood and bent on his extinction. They know he has seen the truth behind the broken world, and, if he survives, he may have the power to shatter it... or to make it whole again.

With over twenty years writing for blockbuster franchises from Activision, Electronic Arts, and Epic Games, Cameron has gained a reputation for bringing powerful storytelling to games. From the Call of Duty trenches to the enchanted World of Warcraft, his tales have engaged, rallied, and inspired millions of readers. Cameron has also written for best-selling comics, anthologies, and co-wrote the independent film Unicorn City, which garnered several awards in the indie circuit and was featured on Netflix. Cameron is a wide-ranging traveler, an adventurous foodie, and the father to three children who are mercifully patient with dad's geeky ways.

“Vividly realized, skillfully crafted, and briskly paced, Etherwalker is a thrilling first chapter for what is sure to be an outstanding saga.” —Micky Neilson, New York Times bestselling author

“It’s unlike anything I’ve read before, and I want more.” —Matt Burns, author of Diablo III: Book of Tyrael

“A heady stew of genetic engineering, Mesoamerican myth, techno-utopianism, and post-apocalyptic dreaming, with a dash of quest fantasy and a liberal helping of nerd apotheosis." —Alex Irvine, Locus-Award winning author