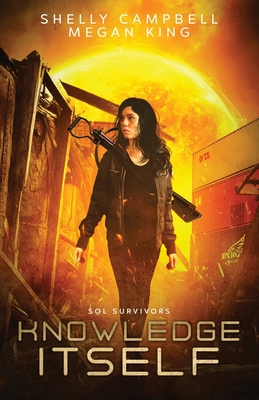 After solar flares wipe out electrical grids worldwide, a small community survives by selling data recovered from decrepit hard drives and rare books. Nostalgic for the days of big business, the commune's founding members call themselves Corporate and micromanage everyone.

Raised into the hustle, Iris Ecosia's ADHD brain rebels at Corporate's strict structure. It's not all bad though. She attracts the attention of Robert Lycos, the son of one of the Shareholders, but their relationship comes to a crashing end when she loses focus at a critical moment and a vital piece of equipment is destroyed.

The mistake plunges her into debt. Corporate demotes her to an indentured gardener. Her romance with Robert dissolves. Worse, there are no paid sick days in the post apocalypse. So when Iris's whole family falls ill, starvation is soon knocking on their door. Meanwhile, the Shareholders live like tycoons.

Iris and her family are not alone in their poverty or their impotent rage at the corporation who keeps them poor, hungry, and dependent. An underground revolution intent on toppling Corporate wants to recruit her. She can still do big things if she joins them, but if she's caught, the Shareholders won't stop at destroying her. They'll go after her family too.