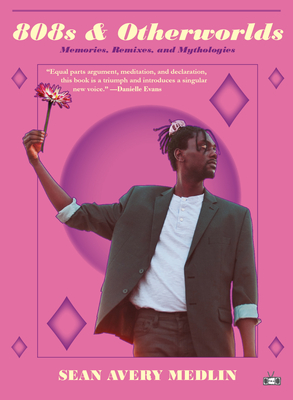 * September's Most Anticipated LGBTQIA+ Literature --Lambda Literary
* Most-Anticipated New LGBTQIA+ Books of 2021 --Paperback Paris
808s & Otherworlds is a beautiful, shapeshifting collection. Medlin considers hip-hop, the suburbs, Blackness, masculinity, celebrity, superheroes, and America as both trap and origin story, exploring and exploding the categories that seek to define and limit us. Equal parts argument, meditation, and declaration, this book is a triumph and introduces a singular new voice. --Danielle Evans

808s & Otherworldsannounces a bold and incendiary new voice in Sean Avery Medlin. Against the backdrop of the Phoenix suburbs where they were raised, Medlin interrogates the effects of media misrepresentation on the performance of Black masculinity. Through storytelling rhymes and vulnerable narratives in conversation with both contemporary Hip-Hop culture and systemic anti-Blackness, 808s & Otherworlds pieces together a speculative reality where Blackfolk are simultaneously superhuman and dehumanized.

From the gut-wrenchingly real stories of young lovers unmythed by segregation or former classmates appropriating Black culture, to the fantastic settings of Hip-Hop songs and comic characters, Medlin weaves a tapestry of worlds and otherworlds while composing a love letter to family and self, told to an undeniably energetic beat.

Sean Avery Medlin's 808s & Otherworlds is an exciting glimpse at the future of poetry. Medlin's poems sing and remix layer after layer of cultural references. Their poems are stunning. As a fellow suburbanite, I loved glimpsing Medlin's dystopic suburban Arizona. --Jos Olivarez

"Like the light of an event horizon, this work races toward and struggles against the gravity of Blackness. Lovechild of Sun Ra and Sailor Moon, Sean Avery Medlin sings into the narrow space between hope and rage, bridging political and pop culture galaxies. If our suburbs have become burnt-out satellites circling a world long lost to racism, this book is our S.O.S., transmitting radio waves for searchers and survivors." --Amaud Jamaul Johnson