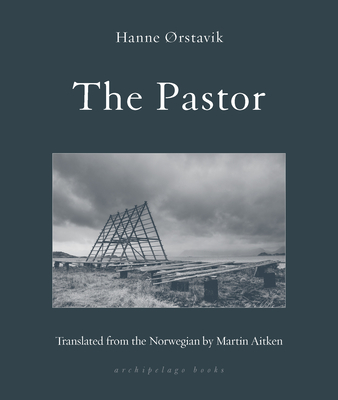 A thought-provoking, existential novel – as Liv searches for meaning and identity in her own life, she must find the words to connect, comfort and lead others.

Liv, an intense and reticent theologian, moves to a bitterly cold fishing village to take up a post as the church’s new pastor following the death of her friend, Kristiane. In the upper rooms of a large house overlooking the fjord, Liv plans her sermons and studies the violent interplay of Norway’s Christian colonial past. She trails downstairs into the apartment below for dinners and breakfasts with a widow and her two children. As Liv becomes acquainted with the villagers and their own private tragedies, memories bloom in passages that urgently question the unpredictable bedrock of language, and the peculiar channels of imagined experience as it might have been, if only there had been a different set of words, or an outstretched hand.

The past mingles darkly with the present, cascading in chilling images: a dog lying dead in the snowy plains, Kristiane’s teeth flashing as she laughs, a procession of singing, knife-carrying protesters curving along a river’s edge. Martin Aitken’s translation of this extraordinary novel rings with the brilliance and rigor of a master.

HANNE ØRSTAVIK, one of the most admired and prominent writers in contemporary Norwegian fiction, published her first novel Cut in 1994. Ørstavik has written a number of acclaimed novels that have been translated into more than 16 languages. She has been awarded a host of literary prizes, including the Dobloug Prize, presented annually for Swedish and Norwegian fiction by the Swedish Academy. The English translation of Love was a finalist for a National Book Award.
MARTIN AITKEN has translated numerous novels from Danish and Norwegian, including works by Karl Ove Knausgaard, Peter Høeg, Helle Helle, and Kim Leine. In 2012, he was awarded the American-Scandinavian Foundation's Nadia Christensen Translation Prize. The National Book Foundation wrote of his translation of Love, "The aerial beauty of Martin Aitken's translation contributes to make the novel a successful rarity." His translation won the PEN Translation Prize.

"Ørstavik skillfully weaves three levels of time together . . . [She] succeeds in creating a powerful story in which the reader hears the voice of the troubled protagonist who is struggling to find meaning in her life, meaning in her relationship with God and with those around her."
--Christine Meloni, The Norwegian American

"A less profound writer than Ørstavik may have opted for a more commercial storyline, one in which the wise townspeople gently educate their bumptious young preacher about their quirky ways. Instead, like Alice McDermott, another author who doesn’t shy away from the spiritual, Ørstavik drives Liv into the realization of her own failure: She hasn’t come to Norway’s far reaches to minister to others; she’s come to escape . . . The Pastor is a quietly radical book."
--Patricia Schultheis, Washington Independent Review of Books

"In Ørstavik’s deeply thoughtful and captivating latest (after Love), a woman spends a year in Kjøllefjord, Norway, as an assistant pastor . . . The various threads shuffle seamlessly in Liv's head and build to a heartbreaking crescendo, filled in with brilliant descriptions of the flat landscape (a church above the fjord sits “brilliantly white... on a dish of darkness”). Ørstavik distinguishes herself as a leading light in international literature. "
--Publishers Weekly, starred review

"[A] beautiful and haunting gem . . . A quiet, resonant novel in which a young female pastor narrates the story of her self-exile to a sparse outpost in the far North and her relationships with the village locals—a rough, hardworking bunch who hide their vulnerabilities . . . The Pastor is the fascinating story of a woman in a strange setting who continually probes the vital question of how to live a meaningful life."
--Lori Feathers, Literary Hub

"The desolate beauty of a Nordic winter mirrors the interior landscape of a troubled priest in The Pastor, a mesmerizing study of spiritual unease . . . With writerly grace and moral seriousness . . . The Pastor summons a sweep of images and questions bound to linger."
--Theo Henderson, Shelf Awareness, starred review

"One of the many things addressed [in The Pastor] is the power of words, as Liv’s area of study was concerning an incident in Scandinavian history where varying translations of the Bible led to violence towards the Sámis . . . I loved Ørstavik’s writing style; it was almost hypnotic, and very comforting . . . Once the reader is sucked in, it is very hard to break away."
--Tracey Ann Thompson, California Reading

"The unreliability of language may be a motif here, but Ørstavik is in full control — and Martin Aitken, his hand steady on the throttle, discerns her intentions with an acute ear . . . The qualities of The Pastor, like those of Love, deliver us to what is actual."
--Ron Slate, On the Seawall

"Liv is a compelling narrator, someone whose own state is perhaps liminal—attached only faintly to life—and who is in constant longing for a connection to others that defies boundaries and heals wounds. This is the triumph of Ørstavik’s novel—to make, in its examination of language, the guilt of colonization ubiquitous and its hope of redemption a collective responsibility."
--Titus Chalk, Heavy Feather Review

"Set deep in the endless night of an Arctic winter, The Pastor is a novel that pushes into that darkness—on an emotional, spiritual, and historical level—in search of some glimmer of clarity, some sense of meaning in an uncertain, insensible world . . . Martin Aitken’s sensitive translation maintains an atmosphere of profound longing for connection and contact."
--Joseph Schreiber, Rough Ghosts

"Liv is not a character who comes quickly to terms with her own motivations . . . She wants to decolonize everything, to lean into every ambiguity, to smack the certainty out of every answer . . . in spite of this being a novel, wordiest genre in literature, the value of words might still be honestly and plainly doubted and interrogated."
-- Abby Walthausen, The Rupture

• In this swift, elegantly constructed novel, Hanne Ørstavik masterfully conveys a sense of entwined dread and longing that doesn't let up for a second. From the opening page to the powerfully moving finale, this tale of a mother and son is riveting. The characters' inner lives are illumined by a beautiful eeriness, and the translation's precision and clarity do justice to the novel's intensities. Read it: it'll bat around your brain for a long time afterward. -- Martha Cooley
• Ørstavik's mastery of perspective and clean, crackling sentences prevent sentimentality or sensationalism from trailing this story of a woman and her accidentally untended child. Both of them long for love, but the desire lines of the book are beautifully crooked. Jon wants his mother, and to be let in out of the cold...the cold that seems a character throughout this excellent novel of near misses. -- Claire Vaye Watkins, New York Times Book Review
• A haunting masterpiece... The deceptively simple novel is slow-burning, placing each character into situations associated with horror - entering an unfamiliar house, accepting a ride from a stranger - and the result is a magnificent tale. -- Publishers Weekly, starred review
• Prizewinning Norwegian Ørstavik follows the parallel courses of a single mother and her 8-year-old son during a night that moves unrelentingly toward tragedy... A nightmarish sense of impending doom hangs over these carefully detailed, tightly controlled pages... icy cold to the core. -- Kirkus Reviews
• Point of view works like a spot of living light in this slender book, with deft perspective shifts occurring between Vibeke, a hardworking, distracted mother, and Jon, her curious, lonely young son, on nearly every page. Mother and son are each on a separate journey, but the reader watches their whole shared life, as memories are folded expertly between breaths in Orstavik's urgent, visually vivid present tense - what a lovely shape. Nothing is wasted. And I'm astonished by the precision and poetry of Martin Aitken's translation from the Norwegian. -- Gina Balibrera, Literati Bookstore
• A creeping sense of unease is ratcheted up by the cool, lucid prose and how the paragraphs shift between mother and son, clarifying how close they should be and how close they aren't... Multi-award winner Ørstavik offers an unsettling read that most will enjoy. -- Barbara Hoffert, Library Journal
• Love can change everything. And it does in this edgy, elegiac and beautifully written novel...What you think will happen doesn't - and what does breaks your heart. -- Kerri Arsenault, Oprah.com
• Ørstavik's ingenious device is to toggle between their two consciousnesses from one paragraph to the next, so that their narratives run as though on parallel train tracks, never to meet, even as they lie cheek to cheek. Layers of unremarkable everyday intimacy and acres of emotional distance are compressed between the lines ... Ørstavik has found fertile territory here in which to dig into the raging solipsism of the inner life ... We are all sealed worlds, Ørstavik seems to suggest; it's dark outside, and it's dark inside too. -- Justine Jordan, The Guardian