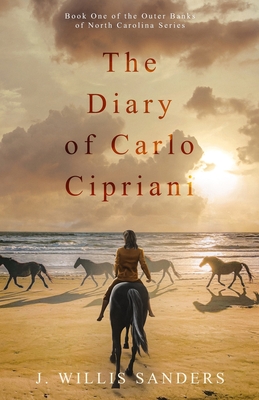 For readers who've always wanted a story of how the Original Spanish horses could've arrived in Corolla, North Carolina, and for fans of Dances with Wolves and Castaway, The Diary of Carlo Cipriani illustrates how the tragedy of a lost love can affect someone, and how, above all else, a person should never, ever give up hope.

"For you see, Luisa, to be loved is one thing, but to be understood is everything."

In 1521, to escape the tragedy of his wife's death, Carlo Cipriani leaves Spain. However, the ship upon which he and his stallion, Cantante, are aboard, sinks during a hurricane.

He makes it to land with four shipmates and several horses, but not his beloved Cantante. The four spend their time trying to survive on what little food they can find with only rainwater to drink. Hoping to return home one day, Carlo writes in his journal to explain to his young daughter why he abandoned her without a single word of goodbye.

Carlo is eventually left miserably alone. When suicide seems a viable option to such a dreary existence, he meets the one person with whom he might find happiness again. However, his past still haunts him, and it seems death has arrived to stalk him and his happiness like it stalked his wife and their happiness at home in Spain. The question is, has it truly, or has his guilt for leaving his daughter caused him to completely lose his mind?