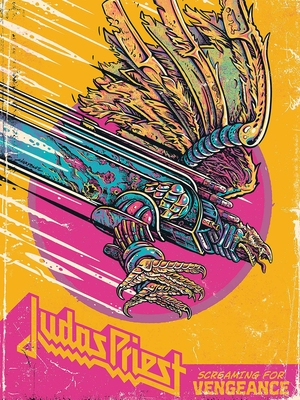 Celebrate 40 years of Screaming for Vengeance with the official graphic novel!

500 years from now, a ring of cities orbit high above the surface of a dead world, controlled by a ruling elite that maintains power through manipulation and brutality. When a naïve engineer inadvertently threatens the status quo with his vital scientific discovery… A BLOODSTONE... he is betrayed by those he trusted and cast out to the broken planet below.  In the wreckage and desolation of a broken world where every day is a battle for survival, he must choose between accepting his new life in exile…or SCREAMING FOR VENGEANCE.

There are few heavy metal bands that have managed to scale the heights that Judas Priest have during their 50-year career. Their presence and influence remains at an all­-time high as evidenced by 2018's 'Firepower' being the highest charting album of their career, a 2010 Grammy Award win for 'Best Metal Performance', plus being a 2006 VH1 Rock Honors recipient. Poised now to celebrate that illustrious career as they enter their 50th year in the industry - 2020 will see the band embark on an epic 50thanniversary tour in celebration. Judas Priest originally formed in 1969 in Birmingham, England (an area that many feel birthed heavy metal). Rob Halford, Glenn Tipton, K.K. Downing and Ian Hill would be the nucleus of musicians (along with several different drummers over the years) that would go on to change the face of heavy metal. The current line up which changed in 2011 consists of Rob Halford, Glenn Tipton, Ian Hill, Richie Faulkner and Scott Travis - Priest also received a second Rock and Roll Hall of Fame nomination in 2019, with 2020 serving as the 40th anniversary of ‘British Steel’ and the 30th anniversary of ‘Painkiller.’ But most importantly, 2020 is the band’s 50th anniversary and they are planning a major tour for the world to celebrate this remarkable band’s 50 YEARS OF HEAVY METAL!!

Neil Kleid is a U.S. cartoonist raised in Oak Park, Michigan, now living in New Jersey. He has received a 2003 Xeric Award grant for his graphic novella Ninety Candles.